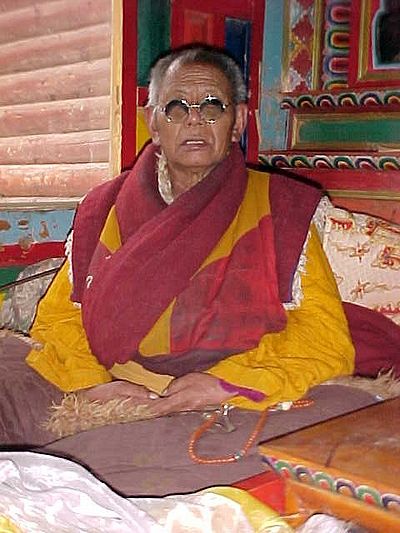 Lama Akhyuk Rinpoche (Tib. ཨ་ཁྱུག; Wyl. a khyug)[1] aka Jamyang Lungtok Gyaltsen (འཇམ་དབྱངས་ལུང་རྟོགས་རྒྱལ་མཚན, 'jam dbyangs lung rtogs rgyal mtshan) or Drubwang Lungtok Gyaltsen (གྲུབ་དབང་ལུང་རྟོགས་རྒྱལ་མཚན་, grub dbang lung rtogs rgyal mtshan)[2] (1927-2011), was one of Tibet’s most renowned meditation masters of recent times. Together with the late Khenpo Jigme Phuntsok Rinpoche (1933-2004), he revitalized the study and practice of Buddhism in Eastern Tibet. He was regarded as an emanation of Longsal Nyingpo (1625-1692).[3]

Akhyuk Rinpoche was born in Trom (khrom), Eastern Tibet in 1927.[4] He entered Trom Dokhol[5] monastery and was ordained at age fifteen, serving teachers of the Sakya, Nyingma and Gelug lineages. He received the Sakya teachings on the Lamdré cycle from Dezhung Ajam Kunga Gyaltsen. Eventually, he went to study with Tromgé Arik Rinpoche, a student of Khenpo Ngawang Palzang, serving him for thirty-three years.[6] During the military occupation of Tibet, Lama Akhyuk was his guru’s attendant, enduring great hardship without regard for his own health or life, and so proving to be an ideal heart-son. Arik Rinpoche empowered him as a holder of his lineage, conferring on him all of the advice and instructions of the Lamdré cycle and the Dzogchen approach.

After Arik Rinpoche passed away in 1988, Akhyuk Rinpoche began teaching, drawing tens of thousands of monastic and lay practitioners from across Tibet and China to the encampment of Yachen Gar that he had established in 1980 in an isolated valley near Kandze in Sichuan province. They settled around him in the barren highlands, where the monks and nuns lived in simple mud-walled houses.

Akhyuk Rinpoche experienced great hardship during his life, especially during the Cultural Revolution from 1966-1976. He lived for decades in his one-room hermitage, sitting in meditation or receiving students and pilgrims. His students spoke in awe of his vast learning, saying that he could recite entire books from memory, and he was renowned for the way in which he imparted instructions on meditation.

Yachen Gar, also known as Yachen Orgyen Samten Chöling, offered students a comprehensive Buddhist education. During the 1990s, the population of monks and nuns grew to over 7,000. The authorities deemed the encampment of huts and tents to be problematic, and in 2001 they ordered the demolition of large parts of Yachen Gar. Akhyuk Rinpoche remained there during the demolitions and continued to teach. The monastic community survived, and in recent years a new nunnery was constructed.

Akhyuk Rinpoche passed away at his hermitage on 23 July 2011. It is reported that after his passing the body of Achuk Rinpoche shrunk from a height of 1.8 meters shrunk to about 1 inch tall, a sign of achieving the rainbow body[7] [8].

Lama Akhyuk's collected writings have been published in three volumes.[9] They include outer, inner and secret autobiographies, a guide to Yachen, and a collection of advice.