From Rigpa Wiki
(Redirected from Chemchok)
Jump to: navigation, search 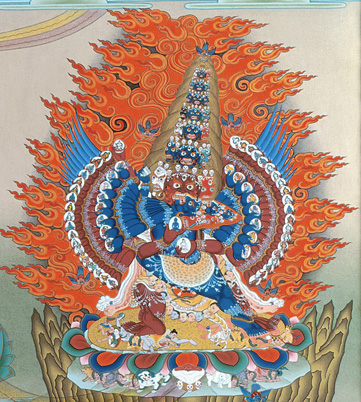 Chemchok Heruka, from the thangka of Tendrel Nyesel

Chemchok Heruka has twenty-one heads and forty-two hands. The two principal hands hold Samantabhadra and Samantabhadri. His twenty hands on the right side hold the five buddhas of the five families, the eight bodhisattvas, the four male gatekeepers as well as three of the six munis – those who emanate in the three higher realms. And the twenty left hands hold the five buddha consorts, the eight female bodhisattvas, the four female gatekeepers and the three munis who emanate in the three lower realms. The deities in the right hands are all male and the deities in the left hands, with the exception of the three munis, are all female. These forty-two deities are the peaceful deities of the mandala of the hundred peaceful and wrathful deities.