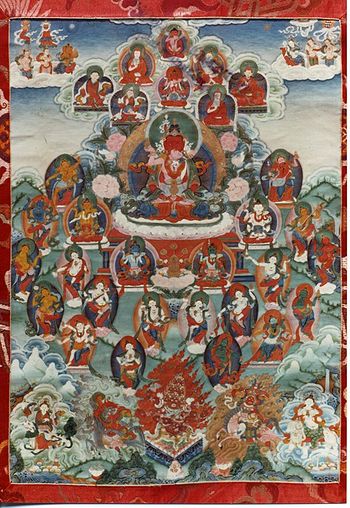 Chimé Soktik (Tib. ཆི་མེད་མེད་སྲོག་ཐིག, Wyl. chi med srog thig) ‘The Practice of the Immortal Life Essence, The Essential Bindhu of Deathlessness’ is a long-life practice focused on Amitayus and his consort Tsendali. It is an earth terma, which was discovered by Zilnön Namkhé Dorjé in 1904 in Bhutan, and has become through Dudjom Rinpoche, its prophesied chödak, the main long life practice within the Dudjom Tersar lineage.

The Chime Soktik cycle includes many texts and practices, and among them are the following:

Those written by Karmapa Khakhyap Dorje:

Those written by Dudjom Rinpoche:

According to Shenphen Dawa Rinpoche:

Through the teaching on the Chime Soktik, we come to understand that increasing life really means increasing the opportunities to attain enlightenment and be of the greatest benefit to all beings, which can manifest as a longer and more prosperous life. As life is precious to every sentient being, the teachings on the Chime Soktik explain the nature of long life and how to extend life for positive karmic benefit. It is of paramount importance that every practitioner learns to extend his or her life in order to reach enlightenment and benefit others. It is important to understand the preciousness of this human life and not to take it for granted. [source?]

Guru Rinpoche receiving the practice directly from Amitayus, in Nepal

The Chime Soktik originated at the time of Guru Rinpoche who traveled to Nepal with his Indian consort, Mandarava, in order to accomplish immortality. They went to the cave way up in the mountains in Nepal, in the famous long life cave of Maritika. There, in the cave, they practised for three years the Chime Soktik. After three years, they achieved immortality, passing beyond death. The practice is so very, very profound. While Guru Rinpoche and Mandarava were in the cave practising, Buddha Amitayus, the Buddha of Long Life, actually came and gave the empowerment, transmissions, and teachings to them directly. The directness of his presence was just like pouring water from a full vase into an empty one. It was not a dream. After three years of retreat, practising the long life methods in the cave, the two of them, Guru Rinpoche (Padmasambhava) and Mandarava his consort, both achieved the state of Buddha Amitayus: immortality. They passed out of the round of cyclic existence through the force of the practice to become fully enlightened.

After this Guru Rinpoche traveled to Tibet, taking with him the scripture of the teachings that had been given to him by Amitayus. In Tibet he then decided to bury the teachings as a terma, and prophesized the time of its revelation, and the details surrounding that revelation. He gave the full transmissions to two of his main disciples, who were two of the original twenty-five disciples. One of them was Vairotsana, and the other Nanam Dorje Dudjom. Afterwards, the termas were concealed physically as well as within the minds of the disciples.[2]

In 1904, in the Mönkha Sengé dzong caverns, the 'Mon Kha Lion Fortress cave of Yeshe Tsogyal associated with her Vajrakilaya practice, in Bhutan, Zilnön Namkhé Dorjé revealed the Chime Soktik as an ancillary practice of the Dorjé Purpa Yangsang Trinlé Chüdril[3].

Later on, these two disciples, Vairotsana and Nanam Dorje Dudjom reincarnated in the form of one lama, Zilnön Namkhé Dorjé (born c. 1868), who was a great tertön. Zilnön Namkha Dorjé went to Bhutan to the practice cave of Yeshe Tsogyal where he found this sater by pulling it out from behind a rock in the cave. This was not done in secrecy, but rather as a public treasure. This means that it was revealed in the presence of many hundreds of people. All the people came to witness the revelation, at which time rainbows appeared in the sky, the sound of roaring dragons reverberated throughout space along with countless other wonders.[4]

According to Shenphen Dawa Rinpoche, the revelation of the Chime Soktik happened symbolically on the exact birth year of Dudjom Rinpoche, one of the two main Chödak of this cycle of practice.

Spread of the practice by Karmapa Khakhyap Dorje in Tibet

Another main prophesied Chödak (lineage holder) of the Chime Soktik was Karmapa Khakhyap Dorje, who received the transmission from Zilnön Namkai Dorje around 1910’s, and who wrote a number of texts on the practice (see above).

According to Gyatrul Rinpoche[5]:

Since its discovery at the end of the 19th century up to 1924, Zilnön Namkai Dorjé kept the terma secret for many years, as was stated in the prophecy of the terma. In it was stated that the practice was meant to be revealed for the first time only to the terma's chödak, who was Dudjom Rinpoche, and only during this chödak's twenty-first year, which was 1924.

As prophesized, in 1924, Zilnön Namkai Dorje bestowed upon Dudjom Rinpoche all the empowerments, transmissions, and teachings on the Chime Soktik and entrusted him to propagate and empower these teachings.

On an impulse, I went to see Zilnön Namkha Dorje, and he received me with a joyful face. After a while he said, "I am old now, and I do not know how long I have to live, but seeing you, I know that I will be able to pass the terma I hold to their rightful heir". He predicted future events and gave me detailed advice. He said, "My terma teaching predicted you, and you will be of great benefit to the Nyingma tradition." Then I requested, "Please, would you transcribe the activity sections of the Vajrakilaya teachings from the yellow scrolls you have discovered?" He replied, "We will see about that, but understand that I now have transferred my terma teachings to you, and it's up to you to decide what you will do with them".

According to Gyatrul Rinpoche[7]:

Then, Dudjom Rinpoche kept the practice secret for many years, in particular from the majority of laymen or ordinary people. The Chime Soktik was transmitted only occasionally to lamas and strong practitioners so as to insure the purity and profundity of the blessings.

Transmission of the practice in the West by Dudjom Rinpoche

On April 27, 1983, Dudjom Rinpoche granted the empowerment of the Chime Soktik and of the Dorjé Purpa Yangsang Trinlé Chüdril in the USA and said[8]:

Guru Rinpoche intended these two teachings to be practiced in these degenerate times, and so at this juncture they are replete with power and blessings. When I received this teaching from the great tertön himself, my life and activities flourished and were fulfilled, and likewise it will be of great benefit for you to practice this.

Becoming the central long-life practice within the Dudjom Tersar lineage

Since the passing of Dudjom Rinpoche, many main Dudjom Tersar lineage holders have taught intensively on the Chime Soktik. Shenphen Dawa Rinpoche, one of Dudjom Rinpoche’ sons, dis this in his centers in the USA, and Gyatrul Rinpoche has done the same.

Oral stories recount that Sangyum Rigzin Wangmo has many times instructed Gyatrul Rinpoche to do strict closed retreats focused on the Chime Soktik in order to prolong his own life.

Today, the Chime Soktik has become the main long life practice for the followers of the Dudjom Tersar lineage, but its empowerment is still a rare transmission to receive.