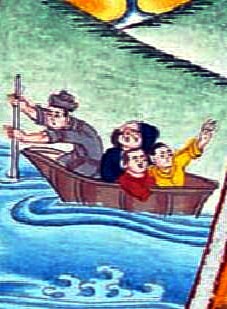 People in a boat, the usual image for name-and-form in the Wheel of Life

Five skandhas (Skt. pañcaskandha; Tib. ཕུང་པོ་ལྔ་, pungpo nga, Wyl. phung po lnga) — the five psycho-physical aggregates, which according to Buddhist philosophy are the basis for self-grasping. They are:

The Sanskrit word skandha means an aggregate, heap or bundle.

Once we have a physical body, we also have what are known as the five skandhas — the aggregates that compose our whole mental and physical existence. They are the constituents of our experience, the support for the grasping of ego, and also the basis for the suffering of samsara.[1]

The five skandhas represent the constant structure of the human psychology as well as its pattern of evolution and the pattern of the evolution of the world. The skandhas are also related to blockages of different types — spiritual ones, material ones, and emotional ones.[2]

When we look more closely at what it is that we call ‘I’, we can see that it includes several elements, not just the parts that make up our physical bodies, but also our various senses and our minds.

In Buddhism, when we want to examine the self more precisely, we can make use of the five categories, which we call the ‘five skandhas’.

In actual fact, all conditioned phenomena may be included within these five groups, but when we are investigating the self, we limit ourselves to the form of our bodies, and our own thoughts and so on.

In its broadest sense, form is spoken of in terms of causal and resultant forms. Causal forms are the elements of earth, water, fire and wind, and then the resultant forms–which are made from these elements–are said to include the five sense faculties and their objects, as well as a slightly more problematic category called ‘imperceptible forms’, which we will not develop here.

The sense faculties are not the ordinary sense organs—our eyes and ears and so on—but subtle forms within the sense organs. They have particular shapes which are described very precisely in the Abhidharma literature.

The first of the sense objects is visual form, which means the various colours and shapes that appear to our eyes. Broadly speaking, colours may be divided into the primary colours—which according to the Abhidharma are white, red, yellow and blue—and the secondary colours. They may be pleasant, unpleasant or neutral.

Sounds, the objects of the ears, may occur naturally or be man-made, or they may be a combination of the two, such as when a person beats a drum. A lot of sounds are just meaningless noise, but some impart meaning. In the case of the latter, they might be a vehicle for ordinary notions, or else the sublime, liberating message of the Dharma. As with sights, sounds can be pleasant, unpleasant or neutral.

Smells or odours can be natural or artificial, and once again, pleasant, unpleasant or neutral.

Tastes are said to be of six kinds, roughly translated as sweet, sour, bitter, hot, astringent and pungent.

Textures, or tactile sensations, may be felt on the body’s surface or in its interior. Interior ‘textures’ include hunger and thirst, and the feelings that come with being ill or deeply relaxed.

In this investigation, form means our physical bodies. More generally, it is all that we can see, hear, smell, taste and touch, and also the subtle faculties that do the seeing, hearing, smelling, tasting and touching.

We are always experiencing sensations, mostly neutral ones, but also painful and pleasant.

They can also be thought of as the sensations that occur based on sense impressions. A sense object such as incense would belong under the skandha of form, but the sensation created when we smell it belongs in this category. In this case, it would most likely be a pleasant sensation.

According to the teachings, feelings are important because they are the basis for attachment and aversion, which lie at the heart of many of the conflicts between lay people, who have not renounced mundane concerns.

Perception means the apprehension of a specific object, as circumscribed and distinct from something else.

On the conceptual level, this means the recognition of identities or names, and on the sensory level it means the discernment of the five objects of sense.

Technically, perception is defined as ‘that which grasps or identifies characteristics’. Perception could be non-conceptual, in the case of the five physical senses, or conceptual, as in the perception of thoughts and ideas.

In all these cases, perception can either be ‘discerning’ or ‘non-discerning’. The five non-conceptual sense perceptions are regarded as discerning when they are operating normally and perceiving their proper objects: colours/shapes, sounds, smells, tastes and textures. Mental perception is said to be discerning when it distinguishes identities or names. This happens when (a) mind recognizes an object and associates it with its name, and (b) the mind knows what is referred to when a name is given.

Perception is non-discerning when the sense organ in question is fully functional but there is no object. This occurs in states of deep meditative absorption, and also when the mind is unable to identify and name objects, as, for example, when you encounter something for the first time and therefore do not recognize it. This is the common experience of children.

Mental perception is also non-discerning when it does not know what is referred to when names are given as, for example, when an unknown language is heard.

(It should however be noted that non-discerning perception does not refer to the mere privation of sensory stimulus, as, for example, when you are in a dark place with your eyes open or in a soundproof room. In these cases, the senses do in fact have objects – darkness and silence, respectively.)

There are as many types of perception as there are phenomena.

Perceptions are subjective experiences, and are said to be important because they are the basis for disagreement and controversy, leading to conflict amongst philosophers who have renounced worldly affairs.

The category called formations is a little complicated. But if we just limit ourselves to mental formations, then it basically refers to thoughts and emotions, or what are technically referred to as the ‘mental states’. Although there are many possible mental states, the Abhidharma teachings speak of fifty-one, which are held to be particularly important.

Sensation and perception are actually included in these fifty-one, but are treated separately in the list of the five skandhas because they are especially noticeable.

There is no need to go into all fifty-one here, but we should know that they include the components necessary for any cognition to occur, namely sensation, perception, intention (meaning the mind is directed towards a particular object), attention (the mind is held on that object) and contact (an object, a functioning sense organ and consciousness all come together).

There are also five states which assist in the discernment of objects. These are interest, appreciation, mindfulness, concentration and discernment. We are talking about these on a subtle level. For example, we need a certain amount of concentration to focus on a particular object, and some discernment to identify it.

Then there are the virtuous states of mind such as faith, conscientiousness, absence of attachment, absence of aggression, absence of delusion, and diligence.

Then there are the principal non-virtuous states of ignorance, desire, anger, pride, doubt and harmful beliefs; as well as the secondary negative states such as vindictiveness, spite, envy, deceit, stinginess, laziness and forgetfulness. Here we also include the drowsiness and agitation we experience in meditation, as well as distraction.

Finally, there are several ‘variable’ states which could be either positive or negative, such as regret.

The consciousnesses of the five senses (seeing, hearing, smelling, tasting, and touching) are non-conceptual. Then the information is fed to the mental consciousness, where concepts can enter in.

Visual consciousness registers only colours and shapes. It does not recognize particular colours, which is the function of the skandha of perception. Nor does it identify certain colours as pleasant, which is done by the feeling skandha.

The followers of the Mind Only school identified eight types of consciousness. In addition to the consciousnesses of the five senses and the mind, they spoke of a ‘defiled mental consciousness’ and the ‘all-ground consciousness’, or alaya vijñana.

The defiled mental consciousness is closely connected with the ego, and is where the notion of ‘I’ and ‘mine’ enters into experience. It is absent in the meditation of noble beings, but never ceases in the mind stream of an ordinary being. This seventh consciousness relates very closely to our ‘self-image’. After we receive data from the senses, and process them with the sixth consciousness, the defiled mental consciousness asks whether or not this experience fits with how we have come to think of ourselves – our ‘image’, in other words. This means there is a lot of judgment here, paving the way for attachment and aversion.

The alaya consciousness is described as ‘mere knowing, an unspecified apprehension, the object of which is general and uncircumscribed’. It is often likened to a storehouse, in which we keep all our habits and instincts, the imprints or ‘seeds’ of our actions which will ripen into future experiences.