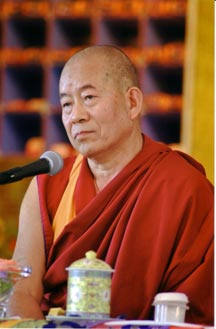 Khenchen Pema Sherab (Tib. པདྨ་ཤེས་རབ་, Wyl. pad+ma shes rab) is one of the seniormost khenpos in the Nyingma tradition and one of the three Khenchen or 'great khenpos' of Namdroling Monastery.

Khenpo Pema Sherab was born in 1936, at Riphu, in the Dergé region of Eastern Tibet. He started to study at the age of eight, learning to read and write Tibetan with his uncle, Lama Chözang, while he was herding cattle. At fourteen, he went to Lhasa and studied under masters and scholars of all schools of Tibetan Buddhism. In 1953 he received ordination from Shechen Kongtrul Rinpoche. In Lhasa, he also met Kyabjé Dilgo Khyentse Rinpoche and served as his attendant for about ten years, fleeing with him to Bhutan and then India in 1959. Over the years, he received many teachings from him, including the Guhyagarbha Tantra, and Longchenpa’s Treasury of Pith Instructions. During the 1950s he also stayed for long periods at Nenang Monastery and Tshurphu, the monastery of the Karmapas, which at that time was home to many great Kagyü masters who had escaped from the troubles in East Tibet. While on pilgrimage in Central Tibet, he met Jamyang Khyentse Chökyi Lodrö at Tsering Jong, the seat of Jikmé Lingpa. While in India, he also studied with Kyabjé Dudjom Rinpoche and Khenpo Tsöndrü, and from Kyabjé Trulshik Rinpoche he received the vows of a fully ordained monk, and also various empowerments and teachings.

In 1968, at the request of Kyabjé Penor Rinpoche he went to Namdroling Monastery to teach. Though the shedra was not yet established at that time, Khen Rinpoche taught the monks for several years. The shedra was finally established in 1978 and from then until 2003, for 25 years, Khenpo Pema Sherab taught there tirelessly while also managing the institution.