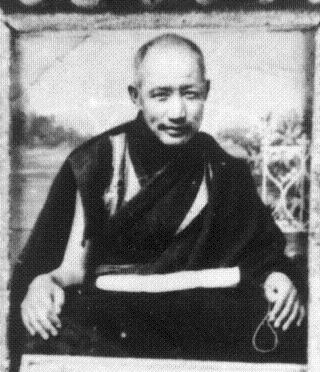 Pöpa Tulku Dongak Tenpé Nyima (Tib. བོད་པ་སྤྲུལ་སྐུ་མདོ་སྔགས་བསྟན་པའི་ཉི་མ་, Wyl. bod pa sprul sku mdo sngags bstan pa'i nyi ma) (1895/1900-1959) was a disciple of Khenpo Kunpal Rinpoche who upheld the pure tradition of Jamgön Mipham Rinpoche. He was born during the fifteenth calendrical cycle in the eastern part of Central Tibet, in the region of Dakpo. From an early age, his enlightened potential was awakened and he entered the path of the Dharma. In time, he joined a party of traders and pilgrims returning to Eastern Tibet, and went with them to Kham in search of teachings.

Being young and a great distance from home, he had to face countless hardships, similar to those faced by Jetsün Milarepa, as he lacked the provisions needed to practise, had only poor clothes to wear and so on. Eventually, he made his way to Dzogchen Monastery in Dokham, and there received teachings from the resident lamas, tulkus, khenpos and acharyas on the various disciplines of the sutras and tantras, but especially on the thirteen great classical scriptures. Through this training, he joined the ranks of the learned.

He also received many empowerments and oral transmissions from the Fifth Dzogchen Rinpoche Tupten Chökyi Dorje. Dzogchen Rinpoche treated him with great affection, and accorded him the title of tulku, gave him a throne, and appointed a pair of monk-attendants to accompany him wherever he travelled. So it was that everyone honoured him with the name “Pöpa Tulku,” i.e., the tulku from central Tibet.

It was at about this time that he developed an extraordinary conviction in the unique tradition of Jamgön Mipham Rinpoche, and felt that he simply had to meet a spiritual teacher who held this lineage. When he made inquiries, he learned that Kunpal Rinpoche of Gegong Monastery was a direct disciple of both Patrul Rinpoche and Mipham Rinpoche. So he went there to meet him, and stayed for a long time in Dzagyü, becoming supremely learned in sutra and tantra and all the branches of science. He went too to the hermitage of Changma where he met with Batur Khenpo Thubga.

A great many students came from all around and gathered together, so that the tradition of Jamgön Mipham Rinpoche was upheld and maintained, as it passed to the various disciples who came, such as Khenpo Chökhyap, Pema Tsewang Lhundrup, Mewa Khenpo Tupten, Rahor Khenpo Tupten and Khenpo Dazer.

Pöpa Tulku composed many major and minor treatises, including his Distinguishing Views and Tenets and his overview and word-by-word commentary to the Prajñaparamita. He had a vision of the regent Maitreya in a dream. In the dream, he held a mirror in each hand, in which he clearly saw the root text and commentary to the Abhisamayalankara. Following this a certainty arose in his mind, and he composed his two commentaries to the Abhisamayalankara, entitled The Oral Transmission of the Invincible Maitreya and An Adornment to the Vision of the Invincible Maitreya.

He also went to Shechen Tennyi Dargyé Ling, where he stayed at the shedra and turned the wheel of Dharma. After Khenpo Kunpal passed away, he continued his enlightened activity extensively throughout the region of Dzagyü.

When he travelled to see Yukhok Chatralwa Chöying Rangdrol (1872-1952), the master announced that a great bodhisattva was to arrive that day, and went out to welcome him. Amid great celebration, he greeted Pöpa Tulku with boundless reverence, recognizing him as an incarnation of the Dharma Lord Patrul Rinpoche, and saying how he himself remembered being Dola Jikmé Kalzang. The wisdom minds of these two great masters merged as one. At that time in his life, Pöpa Rinpoche spoke only of the works of Jamgön Mipham Rinpoche, and Chatral Rinpoche praised his exceptional understanding again and again.

Later, he travelled to the shedra of Drikung Nyima Changra in the northern part of central Tibet and tirelessly gave teachings on attaining the pure lands, as well as general sutra and tantra teachings to many fortunate disciples.