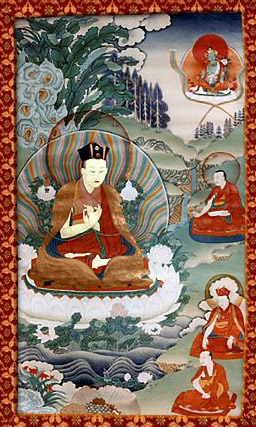 Rangjung Dorje (Tib. རང་བྱུང་རྡོ་རྗེ་, Wyl. rang byung rdo rje), the Third Karmapa (1284-1339), was recognized at the age of five as the reincarnation of the previous Karmapa by Orgyenpa Rinchen Pal, and later enthroned at Tsurphu Monastery. He then studied both the Nyingma and Kagyü traditions and took full ordination at the age of eighteen.

Longchenpa and Rangjung Dorje shared a particularly close relationship since they both counted Rigdzin Kumaradza as one of their root teachers and studied together. The Third Karmapa is responsible for introducing Dzogchen vocabulary into the Mahamudra tradition (as well as many elements from semdé and trekchö), and bringing these two traditions closer together. It is said that during a retreat in his early twenties he had a vision at sunrise of Vimalamitra and then Padmasambhava, who dissolved into him at a point between his eyebrows. At that moment, he realized and received all the teachings and transmissions of the Dzogchen tantras. He wrote many volumes of teachings on Dzogchen and founded the Karma Nyingtik lineage.