Samye Monastery as it is today

The great abbot Shantarakshita made the first attempt to construct the monastery but the building would always collapse after reaching a certain stage. Terrified, the construction workers believed that there was a demon in a nearby river making trouble. However, when the great Guru Padmasambhava arrived from northern India, he was able to subdue the demons obstructing the building of Samye. It is said to have been completed in 766 CE and consecrated the year after. 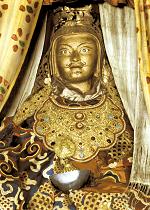 The famous 'Looks Like Me' statue of Guru Padmasambhava at Samye

Samye Monastery was badly damaged during the Cultural Revolution and renovated beginning in the 1980s. Today it is still an active monastery and important pilgrimage destination.

Samye Monastery is laid out on the shape of a giant mandala, with the main temple representing the legendary Mount Meru in the centre. Other buildings stand at the corners and cardinal points of the main temple, representing continents and other features of the Buddhist universe.