Difference between revisions of "Sogyal Rinpoche" 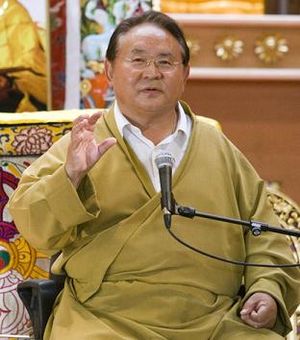 Sogyal Rinpoche (Tib. བསོད་རྒྱལ་རིན་པོ་ཆེ་, Wyl. bsod rgyal rin po che) — Born into the Lakar family in Kham in Eastern Tibet, Sogyal Rinpoche was recognized as the incarnation of Lerab Lingpa Tertön Sogyal, a teacher to the Thirteenth Dalai Lama, by Jamyang Khyentse Chökyi Lodrö, one of the most outstanding spiritual masters of the twentieth century. Jamyang Khyentse supervised Rinpoche's training and raised him like his own son.

With his remarkable gift for presenting the essence of Tibetan Buddhism in a way that is both authentic and profoundly relevant to the modern mind, Sogyal Rinpoche is one of the most renowned teachers of our time. He is also the author of the highly-acclaimed and ground breaking book, The Tibetan Book of Living and Dying. Over three million copies of this spiritual classic have been sold in 34 languages and 80 countries. It has been adopted by colleges, groups and institutions, both medical and religious, and is used extensively by nurses, doctors and health care professionals.

Rinpoche is also the founder of Rigpa, an international network of 130 centres and groups in 30 countries around the world offering the Buddha’s teachings through courses and seminars in meditation and compassion, as well as a complete path of study and practice that follows every stage of the Buddha’s teachings. Rinpoche has been teaching for over 40 years in Europe, America, Australia and Asia.

Following serious allegations against him and Rigpa, Sogyal Rinpoche retired as the spiritual director of Rigpa in August 2017. Rigpa has commissioned an independent investigation that was published in September 2018. Rinpoche is currently in retreat and not giving public teachings.

Since Sogyal Rinpoche’s retirement, Rigpa continues to offer courses, programmes, seminars and retreats led by its teachers and instructors, as well as visiting teachers and lamas, especially from the 'ancient' Nyingma tradition of Tibetan Buddhism. 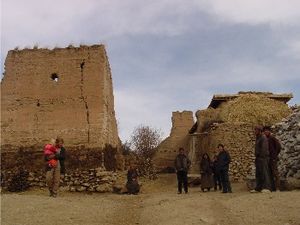 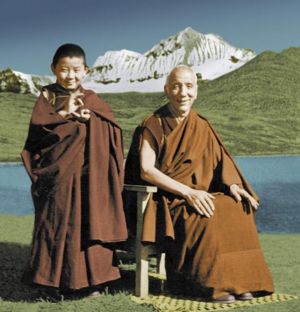 In 1955, Sogyal Rinpoche left Kham, together with his family, Jamyang Khyentse Chökyi Lodrö and around fifty other people, and travelled to Central Tibet. They met the Dalai Lama at the Potala in Lhasa.[1] While in Lhasa, they stayed at the Samdrup Podrang. 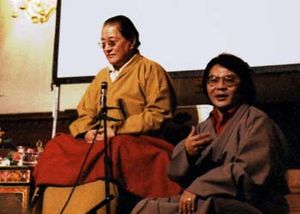