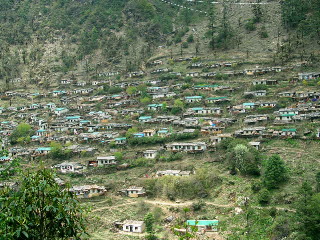 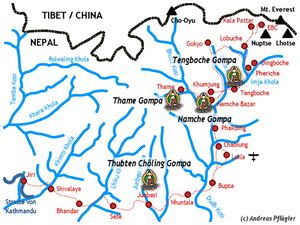 Map of the Solo Khumbu district and Tibetan Gompas

Thupten Chöling (Wyl. thub bstan chos gling) is the retreat community and monastery established by Kyabje Trulshik Rinpoche in the 1960s in the Solu Khumbu district of northeastern Nepal, on the southern slopes of Mount Everest. Over 900 monks and nuns (80% of whom are Tibetan refugees) live there, under Trulshik Rinpoche's care.

Trulshik Rinpoche settled in the region of Khumbhu after fleeing Tibet in 1959. Rinpoche first stayed at monasteries like Thangmé for several years, while hoping to return to his own monastery of Rongpuk Monastery  in Tibet. Finally, in 1968, Rinpoche built Thupten Choling near Junbesi on donated land. However, as he continued to believe that he and his followers would soon return to Tibet, the monastery was not built to last, and began to deteriorate in the 1990s. It was therefore rebuilt as a more stable structure, with reconstruction work beginning in 2001.[1]