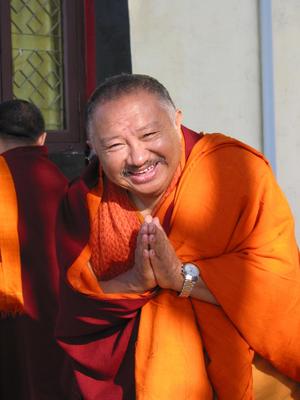 Tsikey Chokling Rinpoche (Tib. རྩི་ཀེ་མཆོག་གླིང་རིན་པོ་ཆེ་, Wyl. rtsi ke mchog gling rin po che), Mingyur Dewé Dorje, aka Kela Chokling Rinpoche (1953-2020) — Tulku Urgyen Rinpoche's second son who was recognized as an incarnation of Chokgyur Lingpa by the Sixteenth Karmapa. Together with his older brother, Chökyi Nyima Rinpoche, he was educated at Rumtek Monastery, Sikkim, the seat of the Karmapa in exile. In 1975, both lamas joined their father, Tulku Urgyen Rinpoche in Kathmandu, Nepal, and established the Ka-Nying Shedrub Ling Monastery. He was a tertön and lay practitioner with a wife and four children. His oldest son has been recognized by His Holiness the Dalai Lama as the seventh Phakchok Rinpoche, of the Taklung Kagyü lineage. The youngest son is the reincarnation of Dilgo Khyentse Rinpoche, Khyentse Yangsi Rinpoche.