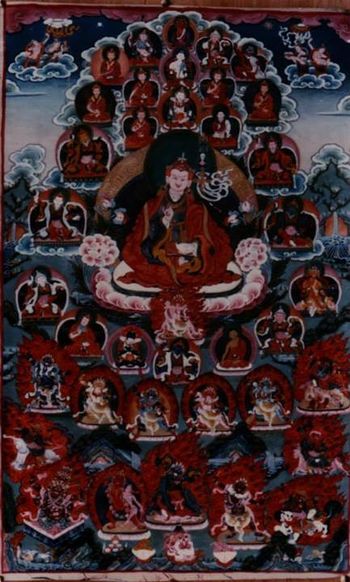 The kings of all the guru sadhanas that have been revealed as hidden treasures are the Gathering of Secrets (Sangwa Düpa) of Guru Chöwang, the Gathering of the Eight Commands (Kagye Düpa) of Dorje Lingpa, the Gathering of the Innermost Essence (Yang Nying Düpa) of Ratna Lingpa, the Gem Ocean (Norbu Gyatso) of Padma Lingpa, the Gathering of Victorious Ones (Gyalwa Düpa) of Zhigpo Lingpa, and the Complete Gathering of Enlightened Intent (Gongpa Yon Dü) of Duddul Lingpa. In addition, there is the dharma cycle entitled Complete Gathering of Sugatas (Deshek Yong Dü) which has fallen to me [Dudjom Rinpoche] as my lot. Although the later has not been revealed from its place of concealment as an earth treasure, it remains in accord, in both word and meaning, with foregoing cycles as regards their ultimate enlightened intent, and partakes as well of the blessings of the ultimate lineage.
People may wish to practice in a manner that combines these seven treasures caches, revealed at earlier and later points in time, flowing as single river.