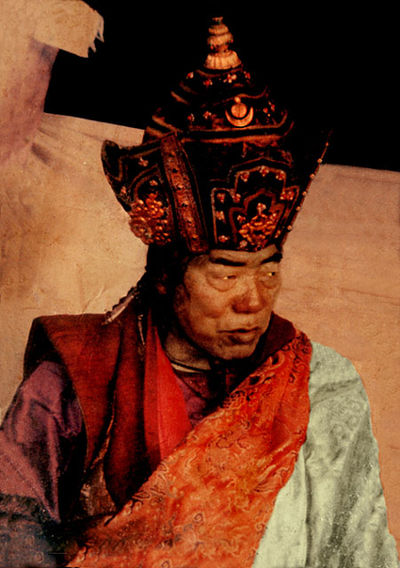 Tulku Dawa Rinpoche courtesy of Ngakpa Chogyam. In the picture, Tulku Dawa is wearing a lotus-hat revealed as a terma object by Chokgyur Dechen Lingpa. The hat was worn by Guru Rinpoche himself.

Tulku Dawa (Tib. སྤྲུལ་སྐུ་ཟླ་བ་ཕི༹ན་པོ་ཆེ་, Wyl. sprul sku zla ba) aka Jikmé Lodrö Sengé (Wyl. ‘jigs med blo gros seng ge) (1923?-2002) was one of the main masters of the Dudjom Tersar lineage based in the lower region of Pemakö. He was a direct student of Dudjom Rinpoche, who recognized him as a reincarnation of his own master Gyurme Ngedön Wangpo.

Tulku Dawa was born in Pemakö sometimes after 1923.[1] He was the younger brother of Tulku Pema Yeshe.

In Pemakö, Tulku Dawa became one of the close direct disciples of Düdjom Rinpoche. He maintained a very good connection with Dudjom Rinpoche. They regularly exchanged letters and spoke on the phone.[2].

According to Lopön Ogyan Tanzin Rinpoche, “Tulku Dawa was very learned.”[4] He became well respected by everyone in Pemaköd. Tulku Dawa was also a close vajra brother of Togden Kunzang Longrol.

According to Lama Rigdzin Phuntsok, ‘While visiting this part of Pemakö, Tulku Pema Yeshe tamed bad spirits and healed many sick people. This made the people from lower Pemakö very happy, and they offered him some land, in a village called Nyering. [5]

Later, after Tulku Pema Yeshe passed away, Tulku Dawa Rinpoche went back to his brother’s land in Nyering. After he cleared and consecrate the area, he moved there with his followers. The place became known as Palying Dem. It was there that Tulku Dawa Rinpoche built a temple dedicated to practicing mainly the Dudjom Tersar lineage. Many activities were performed: Drupchens such as the Namchak Pudri, monthly practices for Guru Rinpoche Day and Dakinis Day. In Palying Dem, Tulku Dawa Rinpoche bestowed empowerments and teachings to selected groups of his close students, but never to any large gatherings.

Dudjom Rinpoche said to both lamas, “Stay here, in Pemakö, don’t go South, to India. Stay in Pemakö until your own death, and continue your Dharma activities there.” It is possible that Dudjom Rinpoche wished for them to stay in Pemakö because he was hoping for the opening of Pémakö Chimé Yangsang to happen. Even though it never happened, this was still the request of Dudjom Rinpoche.[6].

Tulku Dawa Rinpoche was my first teacher. He was the reincarnation of Dudjom Ripoche’s root teacher, Gyurme Ngedön Wangpo. After I was recognized, at the advice of Dudjom Rinpoche, Tulku Dawa Rinpoche enthroned me and wrote a long-life prayer for me. I was fortunate to be held in his care and to receive empowerments and teachings from him at a young age. He even taught me ritual performance of the entire Dudjom Tersar lineage, and Tibetan calligraphy.
I still remember hearing the sound of his low, buzzing voice, constantly chanting, and occasionally a higher pitch when he was reading Dohas. He was a very gentle being, nothing seemed to ever disturb him. Tulku Dawa never once said anything to discipline me, but I knew that I must be engaged in either study or practice whenever I was in his presence.
It was always joyful and awakening to spend time with him. I spent most of my time with him at his other hermitage, called Shelbok, which was far away from all villages.
One anecdote that I can share is of the day we were receiving the teaching of Neluk Rangjung from him. We were in a small temple up in the high mountains called Kimipodong. Toward the end of the teaching, there were tears streaming down his face as he read the verses from the text. Looking at him, I was also shedding tears, feeling that Rinpoche was very much a part of myself. [7]