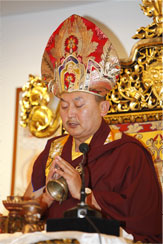 Tulku Pema Rigtsal is a contemporary lama and monk of the nyingma tradition, whose main area of activity is in Humla, a remote area in the northwest of Nepal. He is a main Dudjom Tersar holder of Nepal.

His Birth and Recognition

Tulku Pema Rigtsal (or Tulku Pema Riksal) was born in 1963 to his father Degyal Rinpoche The Second (Pema Jigme Namgyal), and his mother Kyama Tsering. At the age of three, he was recognized by Dudjom Rinpoche and by Ling Rinpoche (The Great Tutor of H.H. the Dalai Lama) as the reincarnation of Chimme inpoche, the head lama of Ngari Pureng She Pheling Monastery

His main enthronement ceremony was held in 1977 at the Shedphel Ling Monastery at Mongod, India, which was overseen by Pema Kundol Rinpoche.

His brother is Shiva Rinpoche, incarnation of Golok Serta Rinpoche.

He has mainly received empowerments, transmission and teachings from :

In 1985, in Humla Yolwang, in the far northwest of Nepal, he established Namkha Khyung Dzong monastery, which follows the Dudjom Tersar tradition. There, Tulku Pema Rigtsal has given to about 150 monks teachings on the sutra, tantra, the Zhugchen Chusum, with a special emphasis on the wisdom view of Mipham Rinpoche.

Tulku Pema Rigtsal gives teachings on the Dudjom Tersar Ngöndro, the The Words of My Perfect Teacher, Bodhicharyavatara, and the Richö, Nang Jang, Neluk Rangjung, and other Dudjom Tersar teachings, to the people of Humla and thos from the Ngari part of Tibet.

Tulku Pema Rigtsal also holds Summer and Winter Dharma Teaching sessions every year for more than five hundred practitioners including monks, Ngagpas (Yogis) and nuns residing in Humla and Ngari, Tibet. Hundreds of hermits are practicing in caves and solitary locations in Humla, Nepal and Ngari, Tibet under his religious instruction and guidance.

Besides Nepal, Tibet and India, Rinpoche has many disciples in Taiwan, Singpore, Hong Kong and the U.S.A.

Among his writing, there are :