From Rigpa Wiki
(Redirected from Universe)
Jump to: navigation, search 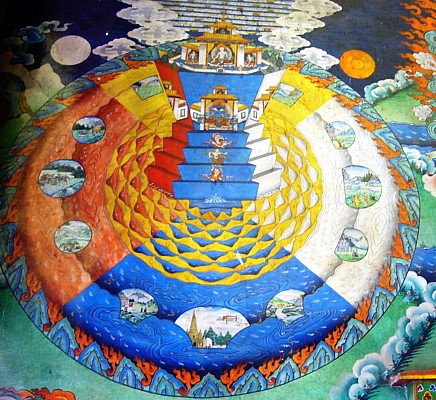 Illustration of our world system

A world (Skt. loka; Tib. འཇིག་རྟེན་, jikten, Wyl. 'jig rten) or small universe (Skt. cāturdvīpalokadhātu; Wyl. 'jig rten gyi khams) is, according to Abhidharma cosmology, a cosmographical unit composed of mountains, continents, islands, freshwater lakes, oceans and inhabited by sentient beings belonging to the six classes or three realms of samsara. Kangyur Rinpoche writes, "In Tibetan, the word for universe (Wyl. jig rten) is a pejorative term, since it means 'basis of decay'. It is so called because, from the moment it comes into being, decay and death are intrinsic to it."[1] The universe or world is also sometimes referred to as 'the [inanimate] environment and [animate] beings within it' (Skt. bhājana-sattva; Tib. སྣོད་བཅུད་, nö-chü, Wyl. snod bcud).

In the centre of each of these worlds, lies a large mountain named Mount Meru with four sides. Around it are seven oceans (Skt. Sītā) separated by seven rings of golden mountains. Outside are four continents and eight subcontinents (two out at sea, left and right of each of the continents). All continents, islands, mountains and oceans are supported by a universal golden basis that is suspended in empty space. This entire world system is surrounded by a ring of iron mountains (Skt. Cakravāḍa) and has its own sun and moon.

There are an unimaginably vast number of these world systems. For instance, a trichiliocosm is composed of one billion such worlds. The trichiolocosm in which we live, the realm of the present Buddha Shakyamuni, is called the Saha world.