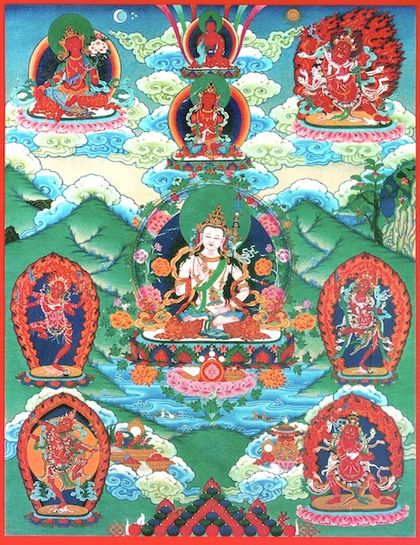 Wangdü (Tib. དབང་སྡུད་, Wyl. dbang sdud) is the common abbreviated title of the prayer by Mipham Rinpoche called The Great Cloud of Blessings: The Prayer which Magnetizes All that Appears and Exists (སྣང་སྲིད་དབང་དུ་སྡུད་པའི་གསོལ་འདེབས་བྱིན་རླབས་སྤྲིན་ཆེན་, snang srid dbang du sdud pa'i gsol 'debs byin rlabs sprin chen). It was written in 1879.

This prayer is called “that which brings within one’s power all that appears and all that exists’. It goes by such a name because if you make this prayer fervently, you will be able to magnetize or bring within your power the phenomena of the entire universe. This comprises both the inanimate environment and its animate inhabitants, sentient beings.

According to Sogyal Rinpoche, ‘If you look more deeply, Wang Dü is magnetizing but it is also taming your mind. Transforming your mind is the most powerful Wang Dü. Practising Wang Dü brings more wang tang[3].

Writing of the Prayer

The Wangdu prayer was composed in 1879 by Mipham Rinpoche. According to Sogyal Rinpoche, ‘Even though the Wang Dü is not identified as a terma—there are no terma punctuations in this work—basically, everything came from Mipham Rinpoche’s wisdom mind, from Manjushri. Like for the Sollo Chenmo, the language of Wang Dü is so extraordinarily evocative.’ [4]

There are nine deities invoked in the prayer:

During the 19th of 20th century

Wang Dü is a very powerful practice and, actually, a very sacred practice. So much so that some nyingma lamas guards it as something quite secret, and do not reveal the practice of Wang Dü [5]. Previously, the Wang Dü prayer flag was not widely distributed and was considered secret or, perhaps, personal.

In Tibet, with Khenpo Jikme Phuntsok

During the 1980’s, Khenpo Jigphun flew many Wangdü prayer flags around his monastery of Larung Gar. In a private conversation with Sogyal Rinpoche, Khenpo Jikme Phuntsok shared he felt that ‘all his work in Tibet was thanks to practising Wang Dü’[6]

According to Sogyal Rinpoche:

Someway, the success of all the enlightened activity of Khenpo Jikme Phuntsok is attributed to the practice of Wang Dü. […] During winter, there used to be almost 65,000 students in Larung Gar. Khenpo Jikphun used to give 10 rupees to all practitioners, requesting each of them to accumulate Wang Dü prayers. Together, they have accumulated millions and millions and millions of Wang Dü. That is why Khenpo Jikme Phuntsok has been able to turn the mind towards the Dharma to so much people, and make Larung Gar this great center[7].

Orgyen Topgyal Rinpoche recounts that ‘While he traveled to Larung Gar, the whole area was filled with red flag [of Wang Dü]’. [8]

Within the Rigpa Sangha

Wang Dü is the main prayer of magnetizing activities practiced within the Sangha of Rigpa. According to Sogyal Rinpoche[9]:

Chagdud Tulku Rinpoche sent us this Wang Dü prayer, he faxes us it to do it many years ago. It was also Nyoshul Khen Rinpoche‘s suggestion to do also Wang Dü. Tulku Pegyal Rinpoche also asked us to do Wang Dü, and then, Khenpo Jikme Phuntsok.

Recently this image has been printed in the Rigpa Calendar, following advice that this would be beneficial.

Teachings on Wang Dü Given to the Rigpa Sangha