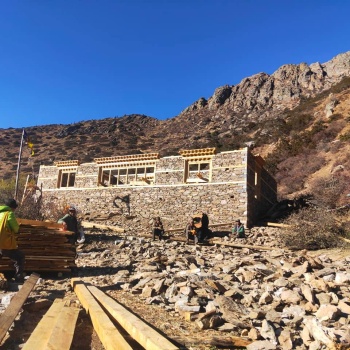 Yu Khyem (Wyl. g.yu khyems) is a retreat place in Humla, Nepal. It was formerly used by a Drikung Kagyü Lama, and became in the 20th century a retreat place of Golok Serta Rinpoche and a Namkha Khyung Dzong Tradition practice place.

In the first part of the 20th century, Golok Serta Rinpoche was instructed by Degyal Rinpoche to undertake a retreat in Yu Khyem. There, after he had spent three years in a Tröma Nakmo (Dudjom) retreat, a natural spring (Wyl. drupchu)—called The Turquoise Water—manifested.[1]

In a Calling the Guru from Afar written by Golok Serta, the colophon speaks of Yu Khyem:

The turquoise water is a spring that arose at Yu Khyem in Humla, Nepal, as the result of a prayer by Golok Serta after he spent there three years in a Tröma retreat. Commanded by his guru Degyal Rinpoche to undertake this retreat, this was the most important retreat in his life for Golok Serta.

In 2021, fulfilling the requests of his father, the Second Degyal Rinpoche, Tulku Döndrup started to rebuild this place.