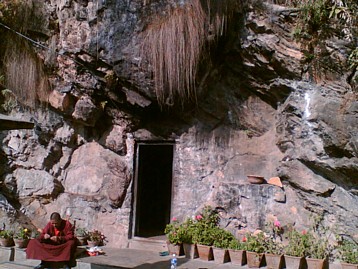 The entrance to Asura cave, Pharping

Asura cave (Tib. ཨ་སུ་རའི་བྲག་ཕུག་, a suré drakpuk, Wyl. a su ra'i brag phug) — a cave sacred to Guru Rinpoche, located above the village of Pharping, near Kathmandu, Nepal. It is also known as the 'Upper cave of Yangleshö'. On the upper left side of the entrance door is the imprint of a hand in the rock.

In the innermost recesses of the Asura Cave [...] is a tunnel that connects this cave to the Yangleshö Cave down below, about half a mile away. It is not a big hole. Wind passes through this passage and you can feel the draft when sitting near it. Although Padmasambhava could traverse freely through solid matter, he used this narrow tunnel to move between Yangleshö Cave and the upper Asura Cave.[1]

In the past, in the Asura cave at the border of India and Nepal, Padmasambhava, the great master from Orgyen, and Langchen Palgyi Sengé, one of his main disciples, opened the mandala of the great and glorious Drekpa Kundul[2]. They gave the spirits the Vajrayana empowerments, and bound them under oath to obey their command. When the twelve Tenma made their pledge and promised to protect Tibet, Guru Rinpoche and Langchen Palgyi Senge poured samaya water on the tongues of the Tenma and placed a symbolic crown, corresponding to their particular buddha family, on each of their heads. Then they placed the unchanging vajra in their hands and entrusted them to protect Tibet, and particularly to prevent the tirthikas from ever entering.[3]

Tulku Urgyen Rinpoche restored the cave in the late 80s, early 90s, and built a monastery and three-year retreat centre for the practice of the Chokling Tersar called Pema Ösel Ling, which surrounds the cave.

The three main images enshrined inside the cave are those of Guru Rinpoche, Yangdak Heruka and Vajrakilaya.