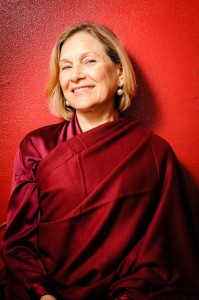 Chagdud Khadro (aka Jane Tromge) is the spiritual wife of Chagdud Tulku Rinpoche.

Chagdud Khadro met Chagdud Tulku Rinpoche—a great master of the Nyingma school with whom the Rigpa sangha has a strong connection—in March 1978, married him in November 1979, and remained his devoted student for twenty-three years. At the time of her ordination as a lama in 1997, Rinpoche invested her as the future Spiritual Director of Chagdud Gonpa Brasil. After Rinpoche’s transition, as head lama, she has focused on maintaining the high calibre of Vajrayana training he had established.

During her time with Rinpoche, Khadro received constant training from him, both in organizing Dharma activities and in the teachings and practice of Vajrayana. She was among the collaborators for his autobiography Lord of the Dance and with his guidance, she compiled commentaries of his teachings on the Dudjom Tersar Ngöndro, Longsal Nyingpo Phowa—the tradition she teaches according to—and the concise version of Apang Tertön’s Red Tara practice.

Formerly the managing editor of Padma Publishing in the United States, Khadro has edited many translations of Tibetan works. Today Chagdud Khadro is tireless in cultivating the seeds planted by Chagdud Tulku Rinpoche: the construction of Padmasambhava’s Pureland, translation and publishing of texts in Portuguese and Spanish, projects related to education and to death and dying. Khadro supervises the activities and teaches in all the Chagdud Gonpa Brasil centers and Chagdud Gonpa Hispanoamérica. She also teaches in Europe, United States and Australia.

She has been invited to Rigpa centres on many occasions, mainly granting teachings and transmissions for the practices of the Longsal Nyingpo Phowa and Red Tara.