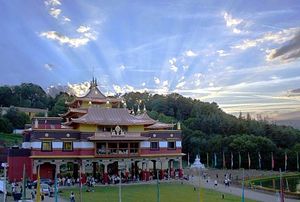 Founded in 1991 by Sogyal Rinpoche and located near Montpellier in southern France, Lerab Ling is Rigpa's international retreat centre and home to the Rigpa Shedra West, and includes the newly constructed temple Palri Pema Ösel Dargyé Ling, also known as The Institute of Wisdom and Compassion. 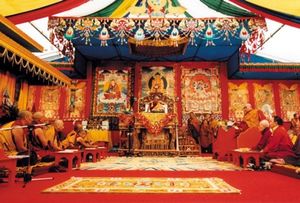 His Holiness the Dalai Lama during the empowerment of Yang Nying Pudri, 19th September 2000, Lerab Ling 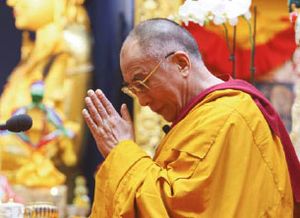 His Holiness the Dalai Lama in Lerab Ling, August 2008 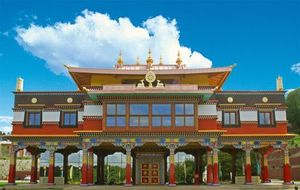 North side of the temple at Lerab Ling

The temple at Lerab Ling, given the name Palri Pema Osal Dargye Ling by Trulshik Rinpoche, was inaugurated by His Holiness the Dalai Lama on August 22nd, 2008.

Sogyal Rinpoche said this about his vision for the temple and its future:

"In whatever way we choose to see it—as a representation of Tibetan culture, a home for Tibetan Buddhism, a centre from which to offer the Buddha's teachings far and wide, or a place of pilgrimage for generations to come—we have built this temple because it is, we believe, one of the greatest contributions we can make towards bringing wisdom, compassion and peace into the world.

"In many places today, people are recognizing that spiritual development is not a luxury, but a sheer necessity for our survival. Witness the almost desperate hunger and need everywhere for spiritual vision, and for the tools to negotiate the challenges of life, find happiness and understand and transform the mind. This is why the very existence of spiritual centres like Lerab Ling has now assumed truly vital importance, because it is on the accessibility of spiritual teachings and the building of a spiritual culture that the very future of humanity depends.

"This temple is for Tibet, and it is for the world."