1. One of the Four Great Kings 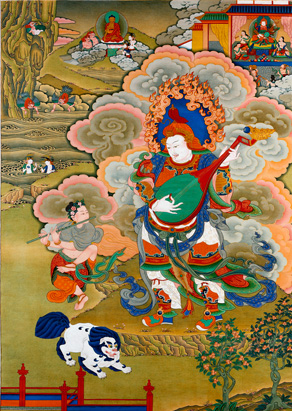 Dhritarashta, one of the Four Great Kings

Dhritarashtra (Skt. Dhṛtarāṣṭra; Tib. ཡུལ་འཁོར་སྲུང་, Yulkhor Sung; Wyl. yul 'khor srung; Eng. 'Defender of the Area') is the Guardian King of the East and chief of the gandharvas, the musicians of the heavens.

In a previous life he and Virudhaka were nagas. Filled with fear of the garudas, the great bird-like beings who prey on the nagas, they would not stir from the bottom of the ocean, but upon hearing of Buddha Kashyapa’s teaching, they took refuge in the Dharma. From then on their virtue protected them from harm and they lived, free of fear, on the ocean's surface.

Whatever sound he hears is turned back, causing harm to whoever produced it, therefore he covers his ears with his helmet and plays a stringed instrument so that he will not hear any other sounds.

2. A Major Character from the Mahabharata

In the Mahābhārata [1], Dhritarashtra [2] (Skt. dhritarāshtra) was the son born to Vichitravirya's first wife Ambika. This blind king of Hastinapura was father to a hundred children by his wife Gandhari. These children came to be known as the Kauravas.