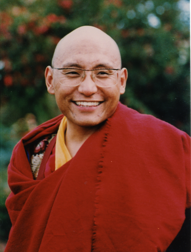 His Holiness the Twelfth Gyalwang Drukpa, Jikmé Pema Wangchen (Tib. འཇིགས་མེད་པདྨ་དབང་ཆེན་, Wyl. 'jigs med pad+ma dbang chen) (b.1963), is the supreme head of the Drukpa Kagyü lineage of Tibetan Buddhism. He is considered to be an emanation of the Buddha of Compassion, as well as an incarnation of several great masters of the past including Naropa and Gampopa.

He has re-established a home for the Drukpa Lineage in exile at his monastery in Darjeeling and Kathmandu. He oversees many monasteries in this tradition in Ladakh, Tibet, Bhutan, Nepal, Sikkim and the Far East, and now has centres in the West.

Rinpoche speaks excellent English, and his teaching is noted for its directness, frankness and freedom from convention.