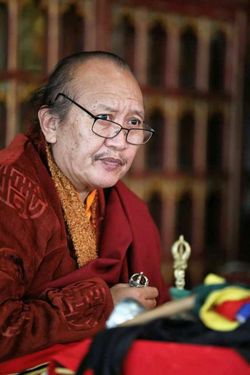 Gyepa Rinpoche was born on July 29, 1960 in Muchu, Nepal, to his father, the Second Degyal Rinpoche, and his mother Kyama Tshering. Gyepa Rinpoche’s grandfather was therefore Golok Serta Rinpoche, a highly revered Dzogchen and Tröma Nakmo practitioner, and a heart disciple of the first Degyal Rinpoche, who was one of the Thirteen of Dudjom Lingpa's disciples who attained rainbow body.

Gyepa Rinpoche was raised in a religious environment under special care and guidance from his father, acquiring a thorough grounding in reading, writing, ritual and Dharma from a young age.