From Rigpa Wiki
(Redirected from His Holiness Sakya Trizin)
Jump to: navigation, search 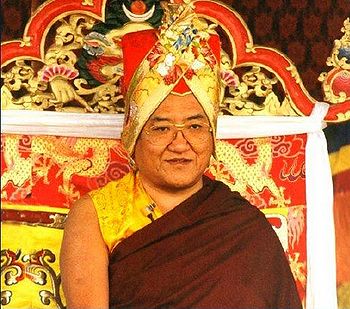 Kyabgon Gongma Trichen Rinpoche, previously known as His Holiness Sakya Trizin[1][2] (Tib. ས་སྐྱ་ཁྲི་འཛིན་, Wyl. sa skya khri 'dzin) (b. 7 September 1945)[3], was the previous throne holder[4] of the Sakya order of Tibetan Buddhism, the 41st patriarch of the Khön lineage which dates back to 1073. He is renowned as an emanation of both Manjushri and mahasiddha Virupa, the founder of the Lamdré teachings, and also as an incarnation of Apang Tertön. He is a brilliant master who manifests profound wisdom and compassion, and his excellent command of English render his teachings particularly beneficial to western students.

He was born in 1945 in Tibet and escaped with his family to India in 1959 where he continues to live and rebuild both the lay and monastic elements of the Sakya tradition. He has guided the establishment of over thirty monasteries in India and Nepal and has helped found Sakya centres around the world.