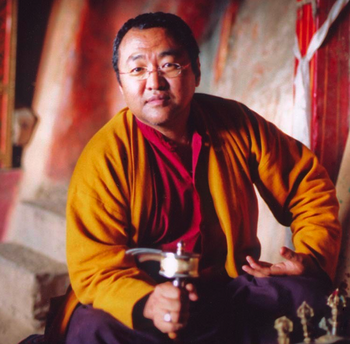 Jigme Tromge Rinpoche (b. 1965) is a contemporary nyingma lama and a main lineage holder of his father Chagdud Tulku Rinpoche's tradition.

Jigme Tromge Rinpoche was born in 1965 in Orissa, India, to Chagdud Tulku Rinpoche. At a young age, he was recognized by Neten Chokling Pema Gyurme[1] as an incarnation of Tsewang Norbu, the direct son of Chokgyur Dechen Lingpa, and an incarnation of Yudra Nyingpo.

In his biography, Chagdud Rinpoche recounts[2]:

My fullest, most auspicious dream occurred when Jigme was a young boy. In that dream I went to Zangdok Palri, Glorious Copper-Colored Mountain, the pureland of Padmasambhava, to take part in a great offering ceremony and to ask Padmasambhava who my son was. However, upon arrival, I didn’t have the audacity to enter Padmasambhava’s presence, so I began circumambulating his celestial palace along with a great gathering of realization holders and dakinis. Suddenly I cam across my mother Delog Dawa Drolma. She had a very white complexion with a bluish tinge. She laughed when she saw me and before I could speak she said, “Your son is Yudra Nyingpo.” Yudra Nyingpo was one of the Twenty-five disciples of Guru Rinpoche who was renowned as a siddha, a translator and a master of Dzogchen. Karma and I rejoiced in the birth of this son.

Jigme Tromge Rinpoche received extensive training in the teachings and practices of the Nyingma tradition and has studied with many great masters such as:

He also studied philosophy with Khetsün Zangpo Rinpoche and at the Shedra of Penor Rinpoche.

Jigme Tromge Rinpoche emigrated to the United States in 1988. After completing the traditional three-year retreat under the guidance of his father, he moved to Ati Ling in 1992 and became its resident lama.

Jigme Tromge Rinpoche travels throughout North and South America and Asia giving teachings. As authorized by his teacher Tekchok Tenpé Gyaltsen, one of the incarnation of Khenpo Ngawang Palzang of eastern Tibet, and at Chagdud Khadro's request, Jigme Rinpoche now offers Dzogchen teachings in the context of the annual retreats initiated by Chagdud Tulku Rinpoche in Brazil.