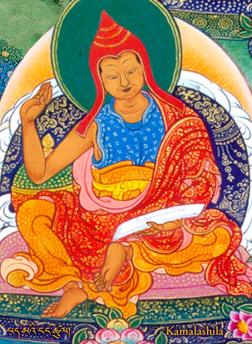 Kamalashila (Skt. Kamalaśīla; Tib. པདྨའི་ངང་ཚུལ་, Pemé Ngang Tsul; Wyl. pad+ma'i ngang tshul) (c. 740-795) — this Indian master and professor of Nalanda University was the main disciple of the great abbot Shantarakshita. He famously defeated a Chinese master of the Hashang school (whose personal name is sometimes given as Mahayana Hashang) in the great debate at Samyé, which took place around 792 AD, thereby ensuring that the Tibetans followed the Indian tradition of Madhyamika which had flourished at the great Nalanda Monastery. He died in Tibet in around 795.[1]

His most famous compositions are the three texts entitled Stages of Meditation (Skt. Bhāvanākrama), on which H.H. the Dalai Lama has taught several times.

His other works include: