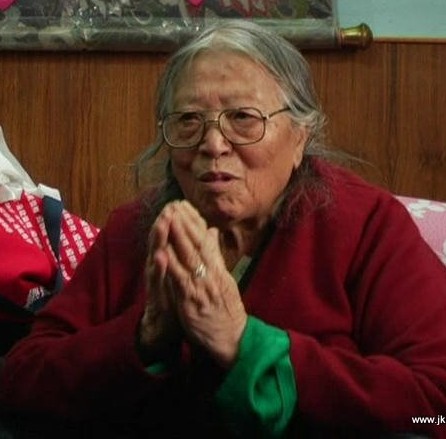 Khandro Pema Dechen (Wyl. mkha' 'gro pad+ma bde chen) aka Chorten Khandro (d. 2006) was considered to be one of the greatest female practitioners of Sikkim in modern times[1]. She was the spiritual consort of Trulshik Pawo Dorje—a senior student of Dudjom Rinpoche—and after the death of her first husband, she became the consort of Dodrupchen Rinpoche until she passed away amid amazing signs in 2006.

Khandro Pema Dechen was born in Kongpo, Central Tibet, where Dudjom Rinpoche had established Lama Ling monastery. From the time of childhood, she was fully inspired by Dharma and Guru Rinpoche[2].

At the age of sixteen, Khandro Pema Dechen married a great adept, Trulshik Pawo Dorje of Minyak, Kham. Most of the time with her husband and sometimes alone, she spent years in solitude in caves and mountains observing strict meditative practices and taking in very little food. Her retreats included shelters of rocks, clothing of rags, and quenching of thirst by hard to get water on the tops of high mountains. One time, a line of mice kept bringing tiny pieces of food and piling them up in front of her to sustain her in a cave in a high mountain. In addition to many other serious practices, she accumulated thirteen sets of ngöndro practice[3].

According to Tulku Thondup[4], "Khandro Pema Dechen attained high realization, along with many visions and revelations, but kept them all secrets".

Khandro Pema Dechen came to Sikkim with her husband around 1947, accompanying her teacher Dudjom Rinpoche, who had been invited by the then Chogyal of Sikkim, Sir Tashi Namgyal. After the passing of Trulshik Pawo Dorje in Sikkim in 1962, Khandro Pema Dechen married the Fourth Dodrupchen Rinpoche, settled in Chorten Gonpa Monastery and supported Rinpoche’s Dharma activities so that they will flourish.

On Sept. 5, 2006, she passed away but remained in tukdam for days and attained rainbow body. Her cremation was made in Tashiding on September 26th, 2006.

People who participated in the cremation ceremonies wrote and shared the following information:

The cloud cover over Sikkim had been specially intense over the past few days and today’s was no different. But no sooner had the funeral process started that the sky started cleaning up. The people who attended the funeral reported that the clouds started parting in the most glorious of shapes and sizes, throwing rainbows of various shapes and shades all around. The monks were specially moved and many could be seen turning towards the sky offering prayers. The cloud cover kept dissipating until, by 10am, there was a glorious sunshine all over the state. This was also accompanied with the arrival of an eagle who circled over the area for a while.

‘The photo is a picture of Thigles (spheres made of colorful lights), which filled the sky during the cremation of Khandro Pema Dechen on September 9, 2006 in Sikkim, India. This is seen as a sign of her high Dzogchen attainment. Photograph by Tsewang Trungkar, explanation text by Tulku Thondup Rinpoche.

According to Tulku Thondup[5]:

During Khandro Pema Dechen’s cremation, the sky was filled with rainbow lights. These were not just beams of rainbow lights, which are not that rare, but tiklés, circles or spheres of rainbow lights, which are of multiple colours, sizes, and designs. They are signs that every particle of the physical form is being transformed into pure light, and then it all is being absorbed into the Ultimate Pure Sphere. This was witnessed by hundreds of people–Tibetans, Bhutanese, Nepalese, Chinese, and Westerners alike–and it was all documented in still photos and videos. Also, in Khandro’s ashes, they found many ringsel.”

At this time, Dodrupchen Rinpoche wrote the following text:

Khandro Pema Dechen, who just passed away, was a disciple and propagator of the teachings of Dudjom Rinpoche and of Trulshik Rinpoche and many other renowned lamas since the young age of thirteen. She was mother to countless numbers of men and women practitioners and an active supported of all Dharma activities.
On the 5th of September, 2006, after completing her beneficial activities, she left for another heavenly realm. I would like to remind everyone that I have no doubt that this wisdom dakini left for Dag Pal Zhing, the pure land of the Buddhas. I request all friends present to have such confidence and offer prayers to the exalt this truth. I, named Dodrupchen, who is left behind, make this request.