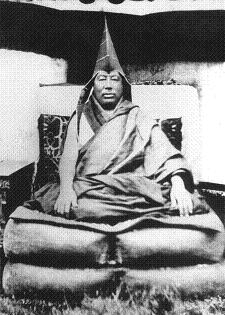 Khenpo Ngawang Palzang (Tib. མཁན་པོ་ངག་དབང་དཔལ་བཟང་, Wyl. mkhan po ngag dbang dpal bzang) aka Khenpo Ngakchung (1879-1941) was one of the most important and influential Dzogchen masters of recent times. He is regarded as an emanation of Vimalamitra, who foretold that he would appear once every hundred years.

He was born on the tenth day of the tenth month of the Earth Hare year (1879). His father was Namgyal of the Nyoshul clan, and his mother was Pema Tso. At the age of seven he learned to read and write from his uncle. At eight, he began receiving empowerments and teachings. His principal teacher was Nyoshul Lungtok, and his other teachers included Atop Rinpoche, Tertön Ngawang Tendzin, Tertön Sogyal, Khenpo Shenga, Katok Situ Chökyi Gyatso, Khenpo Kunpal, and the Fifth Dzogchen Rinpoche.

He took novice ordination in 1893 and full ordination in 1898. He remained with Nyoshul Lungtok until 1900 when he went to Dzogchen Monastery in order to study at the shedra. This was the time that Mipham Rinpoche was in residence.

His main four heart sons ('the four great pillars') were

Some of his other main students are Chatral Sangye Dorje, Khenpo Munsel, Polu Khenpo and Gojo Orgyen Chemchok.