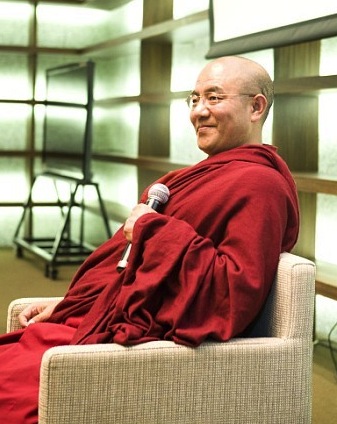 Khenpo Sodargye (Tib. མཁན་པོ བསོད་དར་རྒྱས, Wyl. mkhan po bsod dar rgyas) was born in Drakgo in Kham, Tibet, on the fourth day of the sixth month of the Tibetan calendar in 1962.

After being ordained at Larung Gar Serthar Buddhist Institute in 1985, Khenpo Sodargye relied on Kyabje Khenchen Jigme Phuntsok Rinpoche as his root guru.

After intensive study of the five principle treatises on Madhyamaka, Prajnaparamita, Abhidharma, Vinaya, and Buddhist logic, Khenpo received direct transmissions of tantric teachings such as the Dzogchen, Kalachakra, and the Web of Magical Illusion from Khenchen Jigme Phuntsok Rinpoche and gained unshakable faith in the Omniscient Longchenpa and Mipham Rinpoche. Through his practice, he obtained supreme realization of these teachings.

After engaging in classic Tibetan Buddhist debate and undergoing oral and written examination, he obtained his “khenpo” degree. Khenpo Sodargye was then placed in charge of the institute by Kyabje Khenchen Jigme Phuntsok Rinpoche and became Kyabje’s chief translator for Chinese disciples.

From 1990 to 1999, he accompanied Khenchen Jigme Phuntsok to give Dharma teachings in many countries worldwide, including the United States, Canada, France, Germany, Holland, United Kingdom, Bhutan, India, Nepal, Singapore, Malaysia, Thailand, and Japan.

In 2006, Khenpo began to use modern media, such as Internet and DVD, to spread his teachings; allowing more followers to receive systematic Dharma training and benefiting a wider number of people.

In 2007, Khenpo inaugurated his charitable project, Initiation of Loving Heart, and encouraged Buddhist practitioners to cultivate loving kindness and compassion in daily life and stop ignoring the needy. As an example, he started Wisdom and Compassion Elementary Schools, the Novice Monk Schools, nursing homes, and accommodation to support the practice of senior lay practitioners. From February 2011, Khenpo has served as the Honorary Chairman of Shanghai Kindness & Wisdom Public Foundation.

Due to his productive works, Khenpo has become acknowledged in the academic field.

An Influential Teacher in China

Through his activities, including Dharma translation and teaching, and running charitable organizations which provide help to the needy, Khenpo has become the most influential and acknowledged Tibetan Buddhist teacher in China.

Khenpo often inculcates his students in this way: “As long as we can benefit sentient beings, we should be willing to be their servant for millions and millions of eons, even if only one person could generate one virtuous thought through our efforts.” He also says, “I don’t know how long I can live, but as long as I can breathe, even if there was only one listener, I would try my best to benefit him with Dharma!”