From Rigpa Wiki
(Redirected from Kleshas)
Jump to: navigation, search 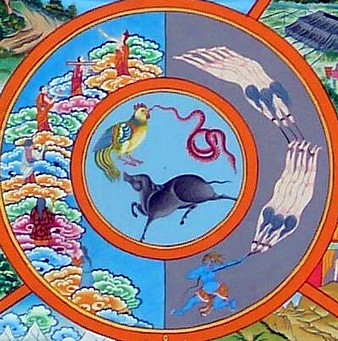 Destructive emotions (Skt. kleśa; Tib. ཉོན་མོངས་, nyönmong, Wyl. nyon mongs) — the negative, destructive emotions which are the cause of suffering. Some translators prefer not to translate klesha as 'emotion', because, as they point out, we would not immediately think of delusion and doubt, for example, as being ‘emotions’.

The Abhidharma further categorizes all destructive emotions into:

In the Abhidharma it says there are three main causes of negative emotions:

His Holiness the Dalai Lama has said that there are three reasons for believing that the destructive emotions can be eliminated from our minds:

"Ignorance is the most fundamental of the kleshas, but also the most difficult to work with, so we need to begin with our attachment and aversion.

Traditionally the teachings begin with attachment, but I think it is easiest to begin with anger or aversion. Attachment is so strong in us we are not really ready to work on it. Of course, if we can deal with attachment then aversion is taken care of automatically, whereas dealing with aversion will not necessarily rid us of attachment. But most people are not prepared to work on their attachment straight away, although they can quite easily see how anger and aversion are destructive and unpleasant.

In a sutra it says this very clearly. It says that of the three poisons, ignorance is the most basic and pervasive. It is like the earth. If we can rid ourselves of this, we will rid ourselves of all the negative emotions, but this is difficult precisely because it is so deep and fundamental.

Yet ignorance does not cause us acute pain or present immediate difficulties, nor will it throw us into the hells. So we can deal with it more slowly.

Then attachment, it says, is like water: it is very pervasive. It causes us pain and suffering and it is not easy to get rid of. Attachment is not all bad—it has both a negative and positive side, e.g. compassion and love, or the resolution to become enlightened. We can be a little patient with this too. Water takes a long time to dry up.

Aversion is compared to fire. It has almost no positive side. Wishing harm for others will always bring us suffering for others and for ourselves too. Aversion then is where we must begin. It has the quality of a flame: it bursts up very quickly and can burn away everything, but when the fuel is no longer there it will go down again just as quickly."

According to the Different Yanas

In the Hinayana, the shravakas and pratyekabuddhas abandon [destructive] emotions or bring them to cessation. In the causal vehicle of the Mahayana, the bodhisattvas purify them. In Mantra, the followers of the Outer Tantras transform [destructive emotions] while the followers of the Inner Father and Mother Tantras[2] take control of them. For a practitioner of Atiyoga, the object of abandonment and its remedy are of one taste.[3]