Mahayoga focuses mainly on the development stage (Tib. kyérim), and emphasizes the clarity and precision of visualization as skilful means.

Overview Given by Alak Zenkar Rinpoche[1]

The vehicle of mahayoga, or ‘great yoga,’ is so-called because it is superior to ordinary yoga tantra since all phenomena are realized to be a magical display in which appearance and emptiness are indivisible.

Once one’s mind has been matured through receiving the ten outer benefiting empowerments, the five inner enabling empowerments and the three secret profound empowerments[2], one keeps the samayas as they are described in the texts.

By means of extraordinary lines of reasoning, one establishes and then realizes the indivisibility of the [two] higher levels of reality, according to which the cause for the appearance of the essential nature, the seven riches of the absolute, is spontaneously present within the pure awareness that is beyond conceptual elaboration, and all relative phenomena naturally appear as the mandala of deities of the three seats.

In the short term one reaches the four vidyadhara levels, which are the results belonging to the path, and finally one gains the ultimate fruition, and reaches the level of the Vajradhara of unity.[3]

The teachings and practices of the Mahayoga belong either to:

The sadhana class itself is further subdivided into:

Mahayoga can also be divided into three classes:

Texts of the Mahayoga

The Lineage of the Tantra Class of Mahayoga

The lineage of these teachings starts in the Akanishtha heaven with the mind direct transmission of the Primordial Buddha Samantabhadra to the buddhas of the five families and sambhogakaya buddhas and bodhisattvas of their retinue such as the lords of the three families.

The lineage then continued through the sign transmission of the vidyadharas with Avalokiteshvara giving these teachings to the nagas, Manjushri to the gods and Vajrapani to the yakshas. Vajrapani also taught the human Licchavi Vimalakirti (Wyl. li tsa ba dri med grags pa)—one of the Five Excellent Ones of Sublime Nobility—at the summit of Mount Malaya.[5]

A central figure in the transmission of the Mahayoga teachings in our human world was King Dza who found on the roof of his palace the eighteen tantras of Mahayoga and a statue of Vajrapani.[6] After praying to Vajrapani, he was able to understand the chapter known as The Vision of Vajrasattva. He practised for six months, using that chapter and the statue of Vajrapani as the support for his meditation. He then had a vision of Vajrasattva, who blessed him so that he understood perfectly the meaning of all the tantras he received.[7] 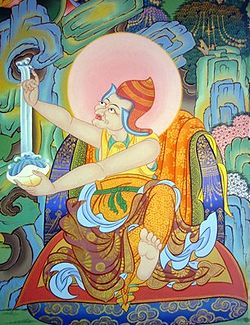 King Dza also received the oral transmission of these teachings from the Licchavi Vimalakirti. The lineage was then passed on to the great siddha Kukkuraja, and then via Buddhaguhya to Vimalamitra and Padmasambhava, who taught them to their Tibetan disciples.[8]

Nyak Jñanakumara received the transmission of the Mahayoga teachings from both Vimalamitra and Guru Rinpoche; he collaborated in the translation of tantras of the Web of Magical Illusion and thus played an important role in the early transmission of the mahayoga lineage.

Alongside this long kama lineage is also the short terma lineage of Guru Rinpoche. Mahayoga teachings and sadhanas related to the Guhyagarbha Tantra have, for example, been revealed in the termas of Chokgyur Dechen Lingpa and Khenpo Jikme Phuntsok.[9]

An extensive chronological list of lineage holders of the Mahayoga, from Buddha Samantabhadra to the present day, can be found in Tulku Thondup's works. (see reference below)