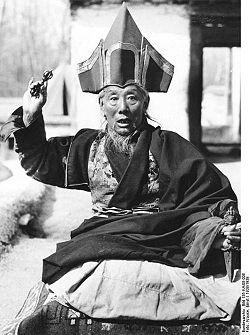 Lingtsang Gyalpo Wangchen Tenzin (Tib. གླིང་ཚང་རྒྱལ་པོ་དབང་ཆེན་བསྟན་འཛིན་, Wyl. gling tshang rgyal po dbang chen bstan 'dzin), also known as Lingtsang Gyalgenma (the 'old king of Ling') (1872–1942), was the king of the province of Ling and a practitioner famous for his mastery of the long life practice focusing on the consort of Amitayus, known as 'Tséyum Tsendali'. He was a disciple of Jamyang Khyentse Wangpo and a teacher of Jamyang Khyentse Chökyi Lodrö.

He had three sons and one daughter, Dechen Tso, who was the mother of Khandro Tsering Chödrön and Mayum Tsering Wangmo. After his death in Dzongri Lingtsang in around 1942 the title of Lingtsang Gyalpo passed to his son Phuntsok Gelek Rabten, a former monk, who later died in Kalimpong. Two of Phuntsok Gelek Rabten's five children are still alive today, a son, Sey Jigme Wangdu, who currently lives in Chengdu and a daughter, Princess Rinzin Wangmo, who lives in Dehra Dun.