Mahakala on the Tibetan Plain 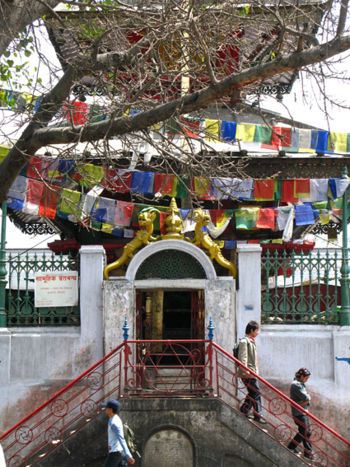 Mahakala on the Tibetan Plain (Tib. བོད་ཐང་དགོན་པོ་, Pötang Gönpo, Wyl. bod thang dgon po), is a small shrine containing an image of Mahakala. It is located in the heart of Kathmandu, on the north side of its busiest road, alongside Ratna Park.

Some consider that this Mahakala image manifested spontaneously, but most learned masters agree that it is one of 108 Mahakala images carved by Nagarjuna that he placed in holy places, such as Bodhgaya, to guard the teachings of the Buddha.

This particular form of Mahakala, with one face, two hands, holding a curved knife, a skull-cup at his heart and a khatvanga in the hollow of his left elbow, his two legs standing on a corpse, is of outstanding workmanship.

It is the guardian of Swayambhunath, so there’s a clear line of sight between the Mahakala image and Swayambhunath stupa. It is said that should anybody build anything between Swayambhunath stupa and the protector there would be disastrous consequences. People did build things and this did indeed prove disastrous. But when the army wanted to build a huge encampment, the statue was given a pair of dark glasses and a small image of the Swayambhunath stupa was stuck over each of its eyes. Since then a lot of building has taken place.

Another legend associated with this image is that it just fell from the sky one day. The great Kagyu master Shri Heruka spent a number of years in this temple. Many years ago a Nepalese master who also stayed at the temple had a vision in which he saw Shri Heruka and this image dancing in the sky.

This particular image was attacked once in 1349 by the army of the Sham Uddin who tried to invade Nepal. They smashed away at it with mallets and hammers and so on, but they couldn’t break it at all. However, one particularly ferocious soldier managed to chip one of the toes, and it is said that the whole invading army died that night of some epidemic, and their faith never spread in Nepal. So now we can also see the feet are covered in silver. According to other accounts, they are responsible for the minor damage we see on the corpse throne and the image's face.

According to local tales, this image used to be on Pulchowk hill near Patan; then it sailed through the air to the Tibetan Plain where it landed. Tibetans regard this image as a wish-fulfilling jewel.

Mahakala is a wrathful emanation of Avalokiteshvara. Wrathful emanations often come in response to obstructions to the practice of Dharma by certain classes of demons or spirits. The emanations will assume the form of those demons in order to subdue them, as is the case with Ekadzati and the Mamos or Vajrakilaya and Rudra.

The place is called “Tibetan Plain” because it is the place where the Tibetan envoys of King Songtsen Gampo camped, when they came to Kathmandu to escort the Nepali princess Brhikuti who was to marry the Tibetan king. According to the oral tradition, the Tibetan Plain (Wyl. bod thang), or Brhikhuti Mandap, today called Ratna Park, which at the time was uncultivated, was given by the king of Nepal to Songtsen Gampo as a dowry.