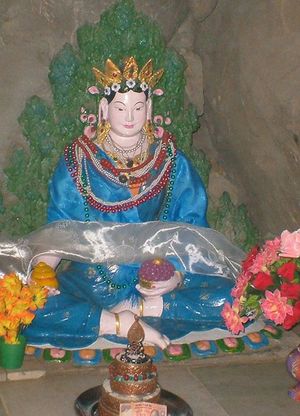 Mandarava; image in the retreat cave above Tso Pema

Mandarava (Skt. Mandāravā; Tib. མནྡཱ་ར་བ་, Wyl. man+dA ra ba)[1] (8th cent.) aka Machik Drubpai Gyalmo — one of the five principal consorts of Guru Rinpoche, she was an emanation of Dhatvishvari and a princess of Zahor. After leaving the palace out of disgust for samsara, and joining a nunnery, she met Guru Rinpoche who gave her teachings. When the king found out, he cast her into a pit of thorns and tried to burn Guru Rinpoche alive. But through his magical powers, Guru Rinpoche transformed the pyre into a lake. When the king had repented his actions and granted them pardon, Mandarava accompanied Guru Rinpoche to the Maratika cave, where through their accomplishment of long-life practice, they saw the Buddha Amitabha face to face and attained the level of a vidyadhara with power over life.