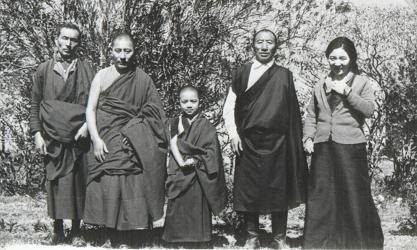 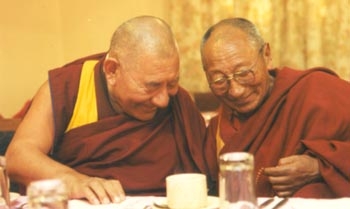 Mewa Khenpo Tupten Özer (Tib. རྨེ་བ་མཁན་པོ་ཐུབ་བསྟན་འོད་ཟེར་, Wyl. rme ba mkhan po thub bstan 'od zer) (1928-2000) — an important Nyingma khenpo who spent much of his later life in Manali, India. He was a student of the great Khenpo Tubga and of Pöpa Tulku Dongak Tenpé Nyima. He was born in Mewa in Nyarong in Eastern Tibet. His father was Tsering Wangchuk and his mother was called Lhakyi. At the age of seven he entered Mewa monastery and received ordination from Khenpo Yeshe Dargye and was given the name Tupten Özer. He received teachings from his paternal uncle, Khenchen Tsewang Rigdzin, who attained the rainbow body, and from his maternal uncle, Khenpo Sonam Nyima, as well as from Khenpo Tubga of Changma hermitage, and in particular from his main teacher, Pöpa Tulku. He arrived in India in 1959, and in 1964 he took up residence in Manali, in Himachal Pradesh, in a place called Pagan. There he spent many years in retreat and taught extensively. His students include Dzogchen Rinpoche and Khenpo Könchok Mönlam.