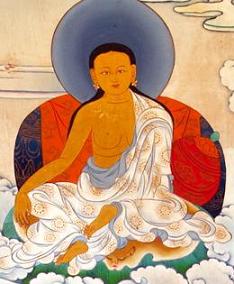 Milarepa (Tib. མི་ལ་རས་པ་, Wyl. mi la ras pa) (1040-1123)[1] is considered to be the founder of the Kagyü school of Tibetan Buddhism. His life story is one of the most popular and enduring narratives in Tibetan culture.

Milarepa was born in the Iron Dragon year of the first sexagenary cycle in a place called Kya Ngatsa in Gungtang in Upper Tibet. He first learned black magic and killed many enemies. Later, feeling remorse for his negative actions, he went to Lhodrak to meet the great Marpa Rinpoche. For about six years and eight months, Marpa made him undergo great hardship for the sake of the Dharma, such as building a nine storey tower, before he finally granted him all the empowerments and instructions. At the age of forty-five, in the Wood Mouse year (1084), Milarepa went to Upper Tibet, and for nine years, moved through Kyirong and Nyal. There he endured hardships, such as wearing only a simple cotton cloth and sustaining himself on nettles, and meditated with such fierce determination that he gained the supreme accomplishment within that very lifetime. Then he went to other places, coming and going, giving instructions of the secret mantra to those who were worthy disciples, and composing many songs of realisation. Finally, in the Water Hare year of the second sexagenary cycle, he departed.[2]

His many disciples, and disciples' disciples founded all of the Kagyü sub-schools. In addition to his closest two heart-sons who are compared to the sun and the moon (respectively Gampopa and Rechungpa), six were likened to the stars and planets. Altogether they are counted as his eight great heart-sons:

Milarepa's collected songs and other works were recently published in five volumes.[4]

Oral Teachings Given by Sogyal Rinpoche on Milarepa's Life Story