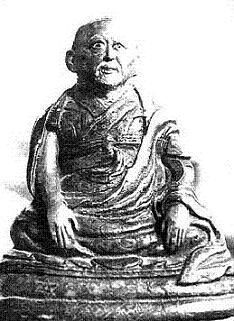 Mingyur Namkhé Dorje (Tib. མི་འགྱུར་ནམ་མཁའི་རྡོ་རྗེ་, Wyl. mi 'gyur nam mkha'i rdo rje) aka Jikmé Khyentse Wangchuk (1793-1870) — the Fourth Dzogchen Rinpoche, an extraordinary master who was the teacher of some of the greatest lamas of the last century, such as Jamyang Khyentse Wangpo, Do Khyentse, Patrul Rinpoche and Mipham Rinpoche. He reached the state of realization of Dzogpachenpo called chö nyi zé sa, ‘the wearing out of phenomenal reality’ (the fourth vision of tögal practice), and had completely transcended all worldly concerns and conventional norms. Mingyur Namkhé Dorje became something of a legend and stories about his clairvoyance and supernatural deeds abound.

During a large ceremony one day at the Dzogchen Monastery, over which he was presiding as Head of the monastery, something rather out of the ordinary took place. It had come to the point in the practice where the monks were all reciting the mantra. Suddenly Mingyur Namkhé Dorje was seen to begin agitatedly muttering: “Come on… You can do it!… Come on…”, as if he were egging someone on. It was with the same kind of enthusiasm that a football fan would cheer on his favorite player. Finally, he just relaxed and sat back contented. A short while afterwards, one of the monks rushed into the temple, ashen-faced and aghast, and spoke to the master of discipline, who in turn conferred with the chant-master. They all looked outraged. Then they approached Dzogchen Rinpoche and told him that a thief had climbed up on top of the temple and made off with the priceless golden sun-and-moon ornament which had crowned the roof. “Yes, I know,” he replied, “I helped him.” “But, how could you possibly do such a thing?” they asked. “This is your monastery!” “Yes, but he really wanted it,” pleaded Mingyur Namkhé Dorje, “and he wanted it much more than I did.”