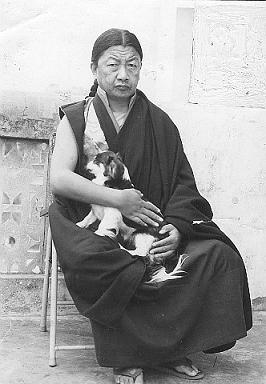 He spent more than fourteen years in retreat, and was a tertön.[1] He was not formally enthroned in Tibet after the passing away of his father, the Tenth Minling Trichen, and so his enthronement was conducted in exile, in the Zangdokpalri Monastery in Kalimpong, northern India, in 1962 led by Dudjom Rinpoche and Dilgo Khyentse Rinpoche.

In 1976 he moved to Dehra Dun to take his seat at the re-established Mindroling Monastery. His students include his own daughter, Khandro Rinpoche. He succeeded Penor Rinpoche as head of the Nyingma school in 2001. He passed away on the third day of the Tibetan new year, Saturday 9th February, 2008.[2]