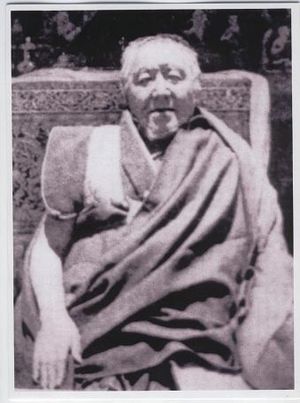 Ngawang Tenzin Norbu (Tib. ངག་དབང་བསྟན་འཛིན་ནོར་བུ་, Wyl. ngag dbang bstan 'dzin nor bu), aka the 10th Dzatrul Rinpoche (1867-1940/42), who was one of the main teachers of Kyabjé Trulshik Rinpoche, is remembered especially for his commentaries on the Thirty-Seven Practices of the Bodhisattvas. One of the foremost disciples of Trulshik Dongak Lingpa, he became known as the Buddha of Dza Rongphu (རྫ་རོང་ཕུ་, Wyl. rdza rong phu) after his place of residence in the upper valley of the Dzakar River, which became known as Rongpuk Monastery. It was there that he undertook retreat and founded the monastery of Dongak Zungjuk Ling in 1901[1] on the northern slopes of Mount Everest. He also studied for many years at Mindroling Monastery.

In 1922 Ngawang Tenzin Norbu met a group of climbers led by General C. G. Bruce and later wrote about the encounter in his autobiography.[2]

After he passed away his body was enshrined in a case made of akaro wood. It was later brought out of Tibet by Trulshik Rinpoche and the monks of Dza Rongphu as they fled in 1959. The body was cremated at Thangmé Monastery in the Solu Khumbu region of Nepal.[3]