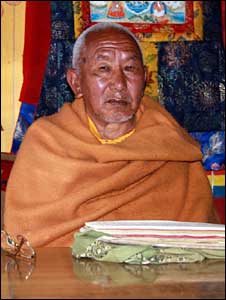 Tengboche Rinpoche (b. 1935) is the abbot of Tengboche Monastery, which is situated near Namche Bazaar in Nepal, at the foot of Mount Everest, and was founded by Lama Gulu in 1916. Rinpoche was born on the same day as His Holiness the Dalai Lama in 1935 to a Sherpa Family in Namche Bazaar, and was soon recognised as the incarnation of Lama Gulu. He went to spend many years in Tibet for his education. He came back to Tengboche Monastery in 1956.

Rinpoche spends most of his time at his monastery where he helps local people and meets with trekkers. He rarely leaves his monastery. One of the main projects he has been working on for the past few years is the making of Tendrel Nyesel vases to help peace and harmony in the world, as well as to prevent natural disasters.

According to Shechen Rabjam Rinpoche, Tengboche Rinpoche is incredibly learned for a yogin.