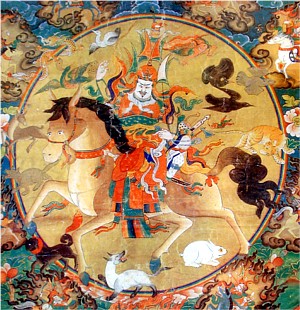 Sollo[1] Chenmo (Tib. གསོལ་ལོ་ཆེན་མོ་, Wyl. gsol lo chen mo) — a practice of invocation and offering to Gesar composed between 1877 and 1880 by Mipham Rinpoche. Its full title is 'The Swift Accomplishment of Enlightened Activity Through Invocation and Offering' (Tib. གསོལ་མཆོད་ཕྲིན་ལས་མྱུར་འགྲུབ་, gsol mchod phrin las myur 'grub). In the practice Gesar is invoked, together with his retinue of dralas and wermas in various forms corresponding to the four kinds of activity and he is requested to carry out his activity and assist the practitioners. Note that the practice should only be recited on important occasions and not too frequently, because it is very powerful.