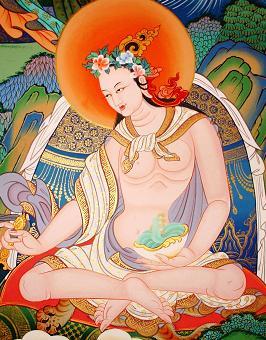 Yeshe Tsogyal who concealed terma together with Guru Rinpoche

Terma (Tib. གཏེར་མ་, Wyl. gter ma) — spiritual treasures hidden by Guru Rinpoche and Yeshe Tsogyal in the earth and in the minds of disciples to be revealed at the appropriate time by ‘treasure revealers’ or tertöns. Many of these གཏེར་, ter were collected by Jamgön Kongtrul and Jamyang Khyentse Wangpo into more than sixty volumes, the Rinchen Terdzö, or Treasury of Precious Termas. The Terma lineage, together with the Nyingma Kama, are the two modes of transmission of the teachings of the Nyingma School.

“In order to prevent the deep teachings and sacred objects of tantra from becoming mixed, diluted, or lost in the distant future, and in order to maintain their blessing powers afresh for future followers, Guru Rinpoche and Yeshe Tsogyal concealed them. They are discovered at the appropriate time by realized masters through their enlightened power.”[1][2] 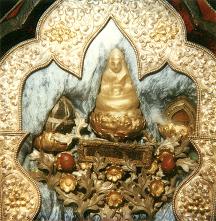 Termas discovered by Chokgyur Lingpa. The golden image at the centre is a kutsab known as Ngödrup Palbar and was discovered from Tsiké Norbu Punsum.[3]

Termas are divided into two categories, according to the manner in which they were concealed and discovered: 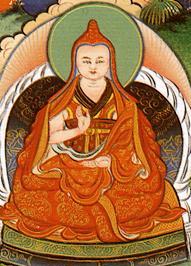 Tulku Thondup explains the Terma tradition of Tibet as follows:

In the Nyingma school of Tibetan Buddhism, the tradition of concealment and revelation of teachings and materials of religious value through the mystical power of enlightened beings is most prevalent by far. This tradition of mystical discovery is known in Tibetan as Ter ('Treasures'), Terma ('Treasured Ones'), or Terchö ('Dharma Treasures' or 'Treasured Teachings').[5]

The main source of the Terma tradition of the Nyingma school is Guru Padmasambhava. [6]

While transmitting esoteric teachings to his realized disciples in Tibet, Guru Padmasambhava concealed many teachings with the blessings of his enlightened mind stream in the nature of the intrinsic awareness of the minds of his disciples through the power of “mind-mandated transmission” (Tib. གཏད་རྒྱ་, Wyl. gtad rgya); thereby the master and disciple became united as one in the teachings and realization. Here, the master has concealed the teachings and blessings, the esoteric attainments, as ter in the pure nature of the minds of his disciples through his enlightened power, and he has made aspirations that the ter may be discovered for the sake of beings when the appropriate time comes.[7]

In propagating the Buddha’s teachings amid the shamanistic society that dominated Tibet at that time, Padmasambhava saw clearly that some teachings would have to wait for a more appropriate time to take root. He concealed them until certain great practitioners…would reveal them and bring them to fruition.[8]