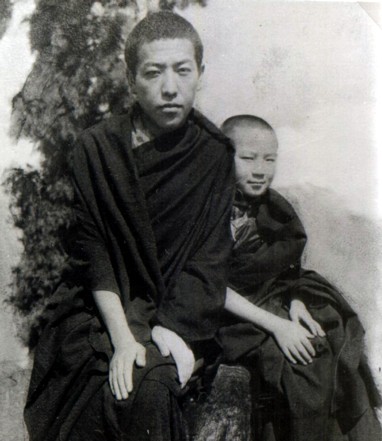 Ngor Thartse Khenpo Sonam Gyatso Rinpoche aka Hiroshi Sonami (1930-1988)[1] — a disciple of Jamyang Khyentse Chökyi Lodrö, and the reincarnate khenpo of Ngor Thartse Sub-Monastery of the Sakya school in Tibet, before his exile to Japan.

Khen Rinpoche was born in Lhasa into an important land-owning noble family from the Shigatsé region. His father, Tsipon Shuguba, was one of the Treasurers of the central government of Tibet under H.H. the Dalai Lama, the father of four tulkus, and was appointed by the Dalai Lama to lead the final defense of Lhasa as His Holiness escaped. Tsipon Shugba, after nineteen years of imprisonment, was brought to America by his sons in 1980. During his imprisonment he also endured the death of his daughter and that of his beloved wife, who departed this life by means of phowa on the eve of her 'show trial' by the Communist authorities. Before his death, Tsipon Shugba completed his autobiography, which H.H. the Dalai Lama calls "an invaluable record of life before the fall of Old Tibet and existence under the Chinese regime." [2]

Sonam Gyatso was recognized by the 39th Kyabgön Sayka Trizin Dragshul Thinley Rinchen and ratified by H.H. the Thirteenth Dalai Lama, Thubten Gyatso, as the incarnation of the previous Khenpo of the Thartse Monastery at Ngor. He was subsequently enthroned as khenpo of Ngor Thartse Monastery and trained accordingly.

One of Khen Rinpoche's brothers, who was recognized as a Gelugpa tulku, today lives in Switzerland. His younger brother, Lama Kunga Rinpoche, who is founder and resident lama of Ewam Choden (Sakyapa) Tibetan Buddhist Center in Berkeley, California, was born in 1935 and recognized as the tulku of Sevan Repa, one of the heart-sons of Milarepa, and initially lived in a Kagyü monastery but found Ngor Thartse Monastery more congenial, became a Sakyapa lama and was made Thartse Shabdrung.

Khen Rinpoche escaped from Tibet in 1958, managing to bring Ngor Monastery's famed collection of mandala thangkas with him, thereby saving them for posterity. His brothers Thartse Shabdrung Rinpoche and Tsenshab Rinpoche escaped the next year.

Life in Japan & His Most Important Work

After his escape, Khen Rinpoche worked in the Tibetan section of the National Library of Japan (hence the alternate name of Hiroshi Sonami, a Japanese rendering of Sonam Gyatso) and authored Tibetan Mandalas: The Ngor Collection. This catalogue raisonne of the famed Ngor Monastery collection of 139 painted mandalas, depicts the essential visual aspect of the Compendium of Tantras of Jamyang Loter Wangpo (1847-1914), a treasury of esoteric tantric knowledge which derives from the flowering of the Rimé movement in the 19th and 20th centuries.

Khen Rinpoche's analytical text represents an authoritative and complete analysis as well as a detailed explanation of the system of the Compendium of Tantras. Khen Rinpoche's text also identifies the meditational deities depicted in each thangka together with their accompanying Sanskrit root texts and the Compendium of Tantras text for each respective teaching. As a result of the extensive vandalism of the so-called 'Cultural Revolution' carried out by the Chinese in Tibet, the collection of mandalas rescued by Khen Rinpoche is the sole surviving complete set of the mandalas for Loter Wangpo's Compendium of Tantras in existence, and represents an irreplaceably precious contribution to the religious history of humanity. Only 300 copies of Khen Rinpoche's book on the Ngor Mandala Collection exist, and in 2010 a single copy commanded a price of over $15,000US.

In his latter years Khen Rinpoche resided in Berkeley, California, where he lived until he departed this realm due to stomach cancer. A deeply humble and compassionate man quietly engaged in his studies and meditation, Khen Rinpoche had few students and preferred to avoid any kind of fame. At the time of his death, Khen Rinpoche was translating an important Tibetan Abhidharma text, Three Experiences: The Jewel That Pleases, an esoteric text detailing psychology and metaphysics on the path and attainment of buddhahood.

Khen Rinpoche sometimes casually remarked that there must have been a mistake when he was enthroned as one of the highest ranking tulkus in the Sakya school. However, this observation was seen by his devoted friends and followers as yet one more example of his profound realization by putting himself below others since he was, in fact, a remarkable lama and the farsighted and courageous savior of a unique facet of the Triple Gem.