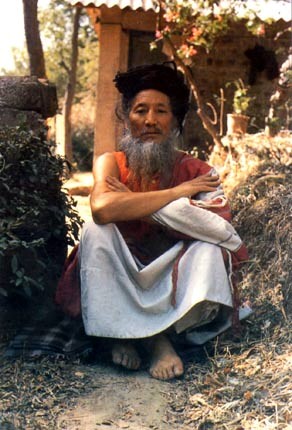 Tokden Atrin, was born in around 1922 in Lhatok, Kham. He became a monk in the Drukpa Kagyü school at a young age, and was given the name Trinlé Lodrö by the 7th Khamtrul Rinpoche of Khampagar in Kham. Under the guidance of his main teacher, Tulku Sönam Tenzin (So-Ten) Rinpoche, Tokden Atrin went off to meditate alone in caves at the age of 24. He practised a special Yamantaka sadhana which is unique to the Drukpa Kagyü School, as well as tsa-lung practice, the Six Yogas of Naropa, and Mahamudra and Dzogchen.

At the age of 37, he left Tibet because of the Chinese invasion and went to Dalhousie, in Himachal Pradesh. He remained in Dalhousie, with some of the other Khampagar tokdens and monks, until the 8th Khamtrul Rinpoche established his new settlement at Tashi Jong. After helping in the construction of the new monastery, he lived the caves around Tashi Jong, and in the monastery retreat centre. Whilst living in and around the retreat centre, he trained young monks and future tokdens, and also gave empowerments and teachings to the community. Once Ani Tenzin Palmo’s nunnery began to function, Tokden Atrin taught and advised her nuns on practice and retreat also.

As Atrin-la got older, he settled down in a small hut in the forest just outside the retreat centre in Tashijong, and in his late 70’s he moved into Popa Rinpoche’s house. Tokden Amtrin rarely left his room in his later years, even refusing a request by the Queen of Bhutan to come to teach and give empowerments. Amtrin-la did however, on the request of his Korean students, visit the holy cave of Maratika in Nepal in his later years, to do Long-life practices.

On July 1st 2005, at the age of 84, Tokden Atrin passed away peacefully in Tashi Jong, India. Dorzong Rinpoche, Dugu Choegyal Rinpoche, and Tsoknyi Rinpoche were with him.