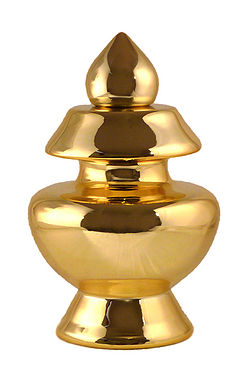 Treasure Vase (Wyl. gter bum, Tib. terbum) or Wealth Vase (Wyl. g.yang bum, Tib. yangbum) is an ancient remedy which can restore vitality and balance to the essence of the elements–earth, air, fire, water and space—that have been depleted by the pollutants and poisons in the environment. It has the power to magnetize wealth and abundance, improve health, remove obstacles to long life, pacify anger and warfare, and increase wisdom and compassion for all. Traditionally, a treasure vase is kept in one’s home or buried at a chosen site.

It is said that one winter, a long time ago, Guru Rinpoche travelled to a land in Tibet where people were suffering from poverty. Their king requested Guru Rinpoche to do a Dzambhala practice to free them from sufferings. Guru Rinpoche miraculously manifested himself as Orgyen Khandro Norlha and he become Lama Norlha, the lama of all Dzambhalas. Through his blessing, the land started to become wealthy and people never even heard the name of poverty again. That is why this Lama Norlha practice is usually requested by kings to eliminate obstacles of the land, attract and gather people, wealth and food, and to bring good luck.

Guru Rinpoche gave specific instructions for the creation of treasure vases to assist with the healing of the environment and the restoration of vital energy for the many beings and realms during these degenerate times. Before Guru Rinpoche left Tibet, he concealed Lama Norlha's practice texts in different places and asked the dakinis and protectors to safeguard them until tertöns recovered them and passed them to their disciples.

According to Lama Tharchin Rinpoche[1]:

There is so much suffering due to the current imbalance between inner and outer elements, and I think many people do not understand the connection between inner and outer. The inner elements in our body (flesh, blood, heat, breath and wind) are really the same as the outer elements. Flesh is earth, blood is water, heat is fire, breath is air, and mind is space or the sky. Also, all the elements exist in three realms of existence. Above the earth are the gods, under the earth the nagas, and on the earth the humans.
These three realms manifest exactly the same inner and outer elements. When there is happiness or suffering in any of these realms, it affects the other two, and especially the human realm! Without a true belief in inter-connectedness, there is no respect. With our narrow minds we each make pollution in different ways, both physical and mental, that damages the outer and inner elements in all realms. Earthquakes, tornadoes, tsunamis, and fires come from the same imbalances that also cause poverty in the human realm. It works both ways. For example, when the naga water element is healed, then rain and wealth come to the human realm.
What causes wealth is positive actions and virtue — physical, mental, verbal. Wealth is due to causes and conditions that are based on merit. Lack of generosity decreases merit and causes poverty. Generosity increases merit and causes wealth. With a Lama Oryen Khandro Norlha empowerment and consecration we are creating positive karma for all of those connected with these treasure vases. (…)
Treasure vases balance and heal the outer environment. In degenerate times, beings suffer from three types of suffering: sickness and disease, poverty and starvation, and weapons and war. Guru Rinpoche gave us these profound instructions and details on healing each realm, particularly the human and naga realm. Each realm has a different life essence and the treasure vases contains each substance — crystal for the god realm, turquoise for the human realm, and conch for the naga realm. Each vase contains yantras, mantras and inconceivable treasure substances from realized beings; from Guru Rinpoche and other lamas of the past up to lamas of the present time, like Thinley Norbu Rinpoche. Each vase contains 'mother essence' medicine pills made with herbs and other blessed substances from Dudjom Rinpoche and other realized lamas. Also, these vases are extra special as the mother essence contains water from the very stream that Thinley Norbu Rinpoche opened with his own hand in Bhutan! There, people travel many miles to drink from and bathe in this stream and they are healed! Every place you put one of these vases, whether buried in the land or placed in the water, a lake or ocean, it will heal the outer elements. If you place one on your shrine or in any clean, beautiful spot, it will also balance the elements, especially those that affect inner and outer wealth. A treasure vase is truly a holy object.

There are many traditions of the treasure vases, such as the one connected with Lama Norlha in the Chokling Tersar and the Lama Orgyen Khandro Norlha practice from the Dudjom Tersar lineage.