From Rigpa Wiki
(Redirected from Tsongkhapa)
Jump to: navigation, search 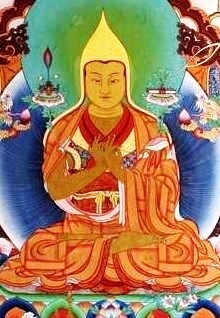 Tsongkhapa Lobzang Drakpa (Tib. ཙོང་ཁ་པ་བློ་བཟང་གྲགས་པ་, Wyl. tsong kha pa blo bzang grags pa) (1357-1419) — the founder of the Gelug school. As a young man he distinguished himself through his study and his intellect. The last thirty years of his life were dedicated to teaching, writing, founding monasteries and other activities that greatly contributed to the revitalization of Buddhism in Tibet.

Je Tsongkhapa Lobsang Drakpa, popularly known as 'Je Rinpoche', was born in the Tsongkha region of Amdo, East Tibet in 1357. Regarded as the living embodiment of Manjushri, and of Guru Rinpoche, he is also considered to have been the reincarnation of a young boy who offered a crystal rosary to Shakyamuni Buddha, and whom the Buddha predicted would be instrumental in the flourishing of the Buddhadharma in Tibet. Many prophecies about him can be found in the teaching of Buddha and later masters, including Padmasambhava. Receiving the first precepts from the fourth Karmapa, Rolpé Dorje, he was raised by a master of the Yamantaka Tantra, the yogin Döndrub Rinchen. By the age of seven, he was already engaged in advanced tantric practices, and at 16, he travelled to Central Tibet, where he studied all aspects of Sutras and Tantras with teachers of various traditions, including the great Sakya Lama Rendawa Shyönnu Lodrö and the Nyingma Dzogchen master Lhodrak Namkha Gyaltsen. He rapidly became an accomplished master of all the teachings he had received.

Throughout his life, Tsongkhapa placed great emphasis on the need for study and practice and had no time for demonstrations of miraculous powers. Whilst he had many visions of Manjushri, who imparted to him secret Tantric teachings, he shared these with only a few advanced disciples. One of the particular features of his teaching was his insistence on pure moral conduct as the basis for successful spiritual training and development, and he gave an especially clear and detailed discourse on the Vinaya. To demonstrate his respect for the importance of discipline, he adopted the yellow hat, yellow symbolizing moral conduct, growth, and, being the colour of the earth element, the basis of everything. Through externally acting as a pure follower of Vinaya discipline, internally maintaining the Mahayana motivation of bodhichitta and secretly engaging in advanced Highest Yoga Tantric practices, Je Rinpoche exemplified the essential unity of the three yanas, and created an example and style of practice for his followers.

Je Tsongkhapa undertook many long retreats. During one intensive four-year tantric retreat, he performed 3,500,000 prostrations and 1,800,000 mandala offerings, underlining the importance of the preliminary practices. On another retreat, he received a vision of Nagarjuna and his five chief disciples, and shortly afterwards gained direct realization on the ultimate truth, going on to write his famous 'Praise to Shakyamuni Buddha'. During yet another retreat he had a monthlong vision of all the masters of the 'extensive and profound' lineages from Buddha Shakyamuni to Atisha, and the chief masters of the Kadam lineage. After this he composed his Great Exposition of the Stages of the Path (Tib. Lam Rim Chenmo), one of the great classics of Tibetan Buddhist literature. Basing this work on quotations from the Sutras and commentaries, and using a format developed by Atisha, Je Tsongkhapa synthesized all of Buddha's Sutra teachings into a systematic and coherent scheme for study and meditation, which is still used as the backbone of practice by followers of the Gelug tradition today. He also wrote many works on Tantric practice, including the Great Exposition of Secret Mantra (སྔགས་རིམ་ཆེན་མོ་, Ngak Rim Chenmo).

In all, he wrote 210 treatises, collected into 20 volumes. All along, Je Tsongkhapa emphasized the combined paths of Sutra and Tantra, and especially the uniting of the View of the Middle Way School with the practice of Highest Yoga Tantra. Whilst he lived simply as a monk, his fame as a great scholar and meditator spread rapidly throughout Tibet and China. At the age of 52, he introduced the New Year 'Great Prayer' festival (Mönlam Chenmo) at Lhasa, and in 1409 founded the great mother monastery of Ganden. At first his followers were known as 'Gandenpas', and only later as Gelugpas—'the Virtuous Ones'. The anniversary of Je Rinpoche's passing away in 1419, the 25th day of the 10th month, has been celebrated all over Tibet and Mongolia, as 'Ganden Ngamchö'.

There have been many well-documented accounts of miracles associated with Je Tsongkhapa. When the Chinese broke open the golden stupa which housed his tomb at Ganden, his preserved body was found to be still warm, with its hair and nails still growing. In Kumbum Monastery, at his birthplace, grows a tree the leaves and bark of which contain Tibetan letters and symbols.

H.H. Khenpo Jikme Phuntsok said, “As a follower of the Buddha, one should study at least the pith instructions of Lama Tsongkhapa—such as In Praise of Dependent Origination and Three Principal Aspects of the Path—if one is unable to learn all his supreme writings extensively.”[1]