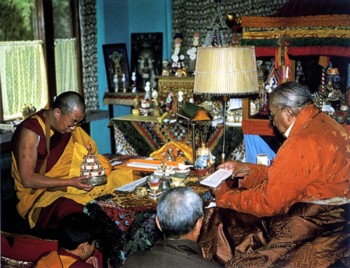 Mandala offering (Tib. མཎྡལ་འབུལ་བ་, mandal bulwa, Wyl. maṇḍal 'bul ba) — a preliminary practice for accumulating merit, in which one symbolically offers the entire universe to the field of merit.

In essence, mandala offering is described as offering the universe. As it says in a tantra:

Through offering to all the buddhas in their pure realms
The entire billionfold universe,
Adorned with all kinds of desirable gifts,
The wisdom of buddhahood is perfected.[1]

The word maṇḍala can be broken into two parts: maṇḍa means the 'essence' or 'centre and circumference' and la means 'taking hold of'. Therefore we can say that mandala means to take hold of the basis or essence for accomplishing all the glorious qualities of the higher realms and the kingdom of Dharma, the sacred truths of cessation and the path. [2] 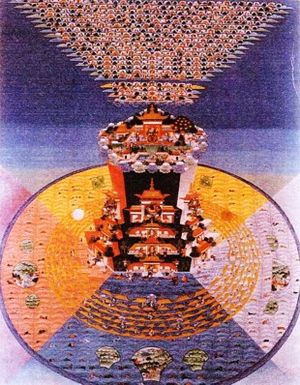 Mount Meru surrounded by the continents and subcontinents, with the gods of the Desire and Form Realms above

...the ordinary nirmanakaya mandala consists of one hundred times ten million worlds each of which has four continents, Mount Meru, and the realms of the gods. This great buddha field is filled with all the abundant riches of gods and men, including the seven precious emblems of royalty and so on. Offer especially your own body, possessions and virtues, in their entirety and without hesitation. And think to yourself: "May I obtain nirmanakaya sovereignty, and, through turning the wheel of Dharma, lead beings along the path to liberation and omniscience."

Then for the extraordinary sambhogakaya mandala, in the space above, consider that the piles represent the five buddha families, complete with the five certainties, in the blissful paradise of Akanishtha-Ghanavyuha, where countless goddesses, such as the goddess of beauty and the rest, offer vast unimaginable clouds of offerings to stimulate the senses. Think: "Through this vast and boundless offering, may we experience the sambhogakaya realms!"

In the sphere above is the special dharmakaya mandala. The naturally arising wisdom of the way things are has always been present as mind's very nature as the 'youthful vase body'. Upon the ground of this youthful vase body, the utter purity of all that appears and exists, arrange piles to represent the appearances of pure realms, deities and palaces, purified entirely of any clinging to kayas and tiklés, and arising as ornaments of the display of reality itself, unceasing compassionate energy and the manifestation of clear light. Think: "Through this offering, may we enjoy the realm of the dharmakaya Samantabhadra!"[3]

Other Forms of Mandala Offering

As for the benefits of mandala offering, it is said that it will help to perfect entirely the six transcendent perfections, which are the foundation or support for all the qualities of the paths and bhumis. The Mandala Sutra says:

Offering the mandala, together with bajung, is generosity.
Cleaning it thoroughly is discipline.
Removing any tiny forms of life is patience.
Practising with enthusiasm is diligence.
Meditation is focusing the mind in that moment.
Wisdom is properly drawing the mandala design.[5]