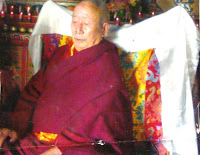 Tulku Tsephel (1926-2010) was a student of Dudjom Rinpoche and later became the head lama of Duddul Raptenling Monastery.

Tulku Tsephel was born in 1926, in Kongpo Buchu Dechen Teng, aka Lama Ling, in Tibet, among numerous positive signs according to oral lineage stories. His father was Yab Chöpel, his mother was Mayum Sangye. Following his birth, the 10th Mindroling Trirab, Gyurme Döndrup Wangyal (d.1963), recognized Tulku Tsephel as a reincarnation of Tulku Rangbar Rinpoche.

At the age of 5, Tulku Tsephel received teachings of the rigney, chonjung, writing, reading from Jigme Chöying Norbu at Rigdzin Gyaling Cave Monastery, in lower Kongpo. At the age of 14, Tulku Tsephel went to Mindroling Monastery and completed there his studies on the Nyingma tradition.

Around that time, Tulku Tsephel’s health started failing and he became ill. People from the local community (like Kongpo Kyi Duk Tsok Pa, Yongpey Tsogpa, Pekö Tsogpo), Camp. #3’s residents along with the Duddul Raptenling Monastery and Namkha Khyung Dzong (Nepal) offered a tenshyuk ceremony. After the tenshyuk, Tulku Tsephel’s health improved and he lived for three other years. During those three years, Tulku Tsephel shared his thoughts and ambitions regarding Duddul Raptenling Monastery with Lama Sonam Tashi, who had been serving him for a long time. Three months prior to his passing, Tulku Tsephel said “I will not be staying long”. On the 5th day of Tibetan new year (March 5th, 2010), Tulku Tsephel passed away. He stayed in tukdam for five days. During those five days, there was a “rain of flowers” (a very light rain which is an auspicious sign), and from the first night of his passing until the cremation, neighbour residents kept hearing voices of dakinis chanting. Tulku Tsephel’s cremation was performed on the 10th day of Losar, and was attended by lamas, monks and lay people alike. After the cremation, ringsels were collected in the ashes, along with a rainbow-colored bone which can still be seen today. Pekö Tulku Gyaltse suggested prayers for the swift rebirth of Tulku Tsephel, which Duddul Raptenling Monastery sincerely followed and performed.

In February 2017, the reincarnation of Tulku Tsephel was enthroned in Duddul Raptenling Monastery, the ceremony was presided by Katok Situ Rinpoche.