Anuyoga focuses mainly on the completion stage (Tib. dzogrim), and emphasizes the inner yoga of channels, winds-energies and essences (Tib. tsa lung tiklé). Visualization of the deities is generated instantly, rather than through a gradual process as in Mahayoga.

Overview Given by Alak Zenkar Rinpoche[1]

The vehicle of Anuyoga , or ‘following yoga’, is so-called because it mainly teaches the path of passionately pursuing (or ‘following’) wisdom, in the realization that all phenomena are the creative expression of the indivisible unity of absolute space and primordial wisdom.

One’s mind is matured through the thirty-six empowerments in which the four rivers—outer, inner, accomplishing and secret—are complete, and one keeps the samayas as described in the texts.

Through logical reasoning one determines that which is to be known, the fact that all phenomena are characterized as being the three mandalas in their fundamental nature, and realizes that this is so.

Meditation practice here consists of two paths. On the path of liberation one practises the non-conceptual samadhi of simply resting in a state that accords with the essence of reality itself, and the conceptual samadhi of deity practice, in which one visualizes the mandala of supporting palace and supported deities simply by reciting the mantra of generation. On the path of skilful means one generates the wisdom of bliss and emptiness through the practices of the upper and lower gateways.

One practises the conduct that is beyond adopting or abandoning in the recognition that all perceptions are but the display of the wisdom of great bliss.

At the culmination of Anuyoga’s own uncommon five yogas, which are essentially its five paths, and the ten stages that are included within these five, one attains the level of Samantabhadra.

There are two sections of Anuyoga:

The Anuyoga tantras are classified as: 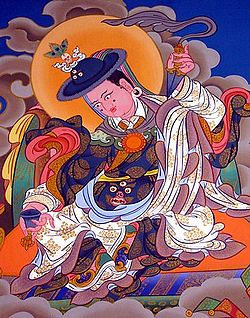 An extensive chronological list of lineage holders of the Mahayoga, from Buddha Samantabhadra to the present day, can be found in Tulku Thondup's works. (see reference below)