From Rigpa Wiki
(Redirected from Demi-gods)
Jump to: navigation, search 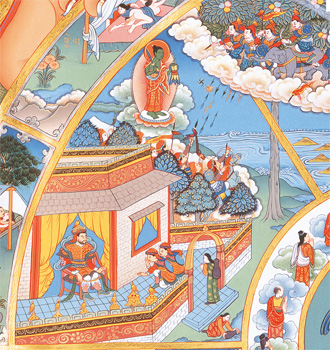 Demigods are powerful and intelligent beings who dwell in cavities inside Mount Meru down to the universal golden basis and whose pleasures and abundance rival those of the gods. The dominant characteristic of the demigods is paranoia and jealousy, so they spend all their time fighting and quarreling among themselves over possessions and territories. Seeing that all the gods’ desires are provided by a wish-fulfilling tree whose roots are in their own realm, they constantly wage war against the gods but invariably lose in the face of the overpowering superiority of the gods.

You can see the demigod realm being acted out every day perhaps in the intrigue and rivalry of Wall Street, or in the seething corridors of Washington and Whitehall.[1]